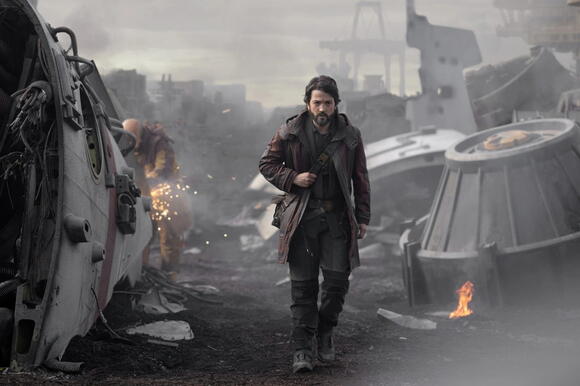 Diego Luna stars as revolutionary Cassian Andor in “Andor,” a “Rogue One” prequel series on Disney+ about political radicalization set in the “Star Wars” universe. Credit: Lucasfilm Ltd./Disney via TNS

It should be about trying, because this isn’t a show filled with magical space wizards and laser swords, nor is it a show divided into black versus white and good versus evil. Instead, it’s a show about the trillions of other people in the galaxy, about real people with fears and dreams. It exists as a morally gray character study — good people do bad things, and bad people do good things.

But where are we in the ever-expanding “Star Wars” timeline? “Andor” takes place five years before the events of “Rogue One: A Star Wars Story” and is divided into multiple intertwining perspectives. The 12-episode season is split into four main stories and culminates in a finale that is both intimate and collective, which proves the actions of a few people actually do amount to something greater.

Like all prequels, “Andor” sets out to answer the how and why questions. How did these people go from point A to point B? The rebellion wasn’t always the unified alliance we see in “A New Hope,” it started out as pockets of disjointed groups scattered throughout the galaxy. The show rationalizes — even validates — the ideologies of each group and why they act the way they do. Some are spies, assassins and political idealists, others are ordinary citizens trying to help their neighbors.

The Empire, for that matter, is shown in an entirely new light. TIE Fighters are not cannon fodder for X-Wings, but screeching predators who patrol the sky. Stormtroopers are not brainless grunts, but an elite military force that can stop insurrections. The political players on Coruscant are competent and relentless, responding to rebel activity swiftly and usually successfully.

The worlds are tactile, grimy and lived in. Whereas “Kenobi” and “The Book of Boba Fett” shrunk the galaxy, “Andor” brings a scope not seen in a long time. This is, in part, because it was shot on location and because the creative team chose practical sets over CGI whenever possible.

Of course, it helps when you have good writing — and a good cast.

“Andor” is not a show that stuffs inconsequential action scenes down its audience’s throat, but instead focuses on a slow burn of tension that slowly crescendos toward its tipping point. Dialogue is developed with care and the characters with confidence, culminating in not one but several monologues that should be placed on pedestals in the annals of “Star Wars” history. The music is richer and more evocative than ever, echoing the emotion of the images on the screen.

The writing in Star Wars has always been political, and “Andor” showrunner Tony Gilroy — who previously worked on “Michael Clayton” and the “Bourne” trilogy — is no stranger to political thrillers. Here, he trusts the audience to follow the multi-layered story and pick up on plot points that reference real life issues — including class warfare, the exploitation of indigenious peoples and totalitarian prison systems.

The cast brings together familiar faces, like Diego Luna, Genevieve O’Reilly and Forest Whitaker, while also introducing new ones like Stellan Skarsgård and Denise Gough. When Skarsgård and Whitaker finally come face to face, it’s like letting two juggernauts into a room together.

Like all “Star Wars” media, there are parallels to other content, but rather than feeling forced, they are natural and subtly slide into the background to indicate power dynamics and character arcs. What does it mean for Cassian Andor to look into the sunset? Or to build the very thing that will be your undoing?

“Andor” is a left hook punching far above its weight class. Looking toward shows like “The Sopranos,” “Better Call Saul” and the early seasons of “Game of Thrones,” it wants to be a TV show first, and a Star Wars show second. It focuses on its characters, not on which cameo can be shoved in next.

In the end, “Andor” won’t be a show for everyone, as it’s a show about the start of a revolution — but it did just single handedly reinvent the “Star Wars” franchise.

And all it had to do was try.