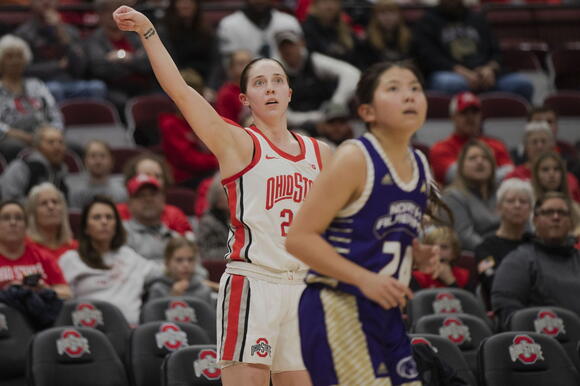 The No. 4 Ohio State women’s basketball team (6-0) will travel to Louisville to take on the No. 18 Cardinals (5-2). Credit: Zachary Rilley | Photo Editor

The No. 4 Ohio State women’s basketball team faces one of its toughest road opponents of the season in No. 18 Louisville Wednesday at the KFC Yum! Center.

The game is a part of the final Big Ten/ACC Challenge, as the series is being discontinued after this season due to the Big Ten ending its media partnership with ESPN.

The Buckeyes (6-0) enter the matchup after a three-game home stretch including wins over McNeese State, Wright State and North Alabama. The Cardinals (5-2) are the first ranked opponent Ohio State plays since its 87-75 upset victory over then-No. 5 Tennessee in the season opener Nov. 8.

Ohio State’s opening win has given the Buckeyes plenty of confidence heading into Wednesday’s game, as senior guard Taylor Mikesell said the Buckeyes learned a lot against Tennessee that will help them in their first major road test.

“I think just having that, knowing we were ready from the jump,” Mikesell said. “Knowing that we can set the tone with our defense and then how our offense comes from our defense.”

Ohio State will likely be playing against the largest crowd it’s faced on the road this year. Louisville currently has the fourth-highest average attendance in the country, but head coach Kevin McGuff said his team is ready for the chance to play in that atmosphere.

“They have excellent fans,” McGuff said. “We know the Yum! Center is going to be a really tough environment for us to play in but also a great opportunity, and I think our kids enjoy some of those bigger crowds and big environments.”

The Buckeyes are excelling on both sides of the ball, boasting the No. 3 scoring offense in the country at 94 points per game and leading the nation in turnovers forced at 29 per game.

After beginning the season as the No. 7 team in the Associated Press Top 25, Louisville dropped 11 spots to No. 18 ahead of the challenge.

During the Battle 4 Atlantis, the Cardinals went 1-2, losing to unranked opponents South Dakota State and Gonzaga while beating then-No. 3 Texas.

The Cardinals picked up a win at home over Longwood in their last matchup without their leading scorer, junior guard Hailey Van Lith. The left hander is currently the second-highest scorer in the ACC, averaging 21.2 points through six games.

Stopping Van Lith will be a test for a Buckeye defense that hasn’t defended a 20-point scorer this season, and McGuff said the team will have its hands full trying to stop “one of the best players in the country.”

“We know we’ll have our hands full with her,” McGuff said. “I don’t think one person can really stop her. It’s kind of a team effort, so we got to get up and get a little bit of pressure on her.”

Tipoff is scheduled for 7:30 p.m. and will be available on the ACC Network.