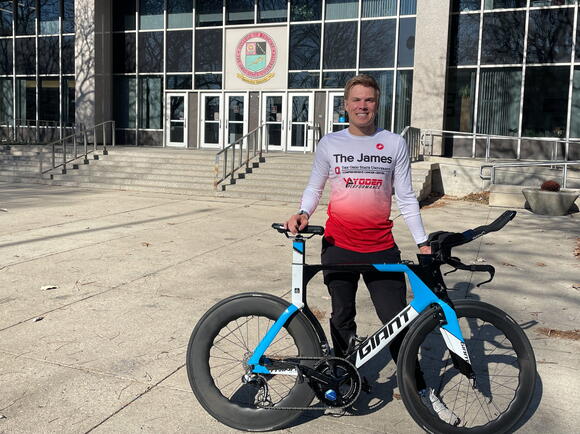 Training 20-30 hours a week for a triathlon requires extreme dedication, and so does medical school. But one man juggles both.

“It’s still difficult to wrap my head around the results that I’ve had this season because I kind of came into this sport intentionally naive, where I just wanted to focus on myself and just focus on improving and getting better every day,” Marquardt said. “I wasn’t really thinking that much about comparing myself to others.”

The Ironman World Championship is an annual competition similar to a triathlon, consisting of 2.4 miles of swimming, 112 miles of biking and running a marathon which is 26.2 miles. The 5,000 plus athletes can find how to qualify on the championship’s website .

In the 2022 World Championship, Marquardt finished with a time of 8:35:49, coming in first in his division and third overall as an amateur competitor, according to the Ironman website.

Marquardt said he initially got involved with the triathlon after the COVID-19 pandemic canceled his senior season as a swimmer at Princeton University, so he and a teammate signed up for an Ironman race in order to have something for which to train.

“I qualified for the Ironman age group World Championship, which was fall of 2021, which was also my first year of med school,” Marquardt said.

After placing second in his age group at the World Championship that year, Marquardt said he realized his athletic career was not over.

Marquardt said juggling medical school and training for the triathlon has not been easy, requiring some sacrifices, but his experience swimming at the collegiate level prepared him.

“I think, regardless, triathlon provides a lot of balance to my life,” Marquardt said. “I’m definitely a little bit on the introverted side at times, and so, believe it or not, doing a five-hour bike ride is actually something that, by and large, rejuvenates me and helps recharge my batteries.”

Marquardt said in college his initial career plan was working to fight climate change, and he knew he wanted to make a difference in the world, but also wanted to have a direct impact on people’s lives, which led him to medicine.

“What I really wanted was that direct interaction with patients and being able to see them get better and help them through those hard moments, and those good moments was what I really felt was my calling,” Marquardt said.

Marquardt said he uses what he learned about the body in medical school to improve his performance in races.

“I think the simplest one is my use of a continuous glucose monitor, where I use that to help make sure that I’m fueling enough,” Marquardt said.

Dr. Carmen Quatman, an associate professor of orthopedics, said there is a lot of scientific knowledge about optimizing body performance, but putting the evidence into action can be challenging.

“Being willing to apply a science in a way that actually improves performance requires dedication,” Quatman said. “He has tools and he has evidence, but being able to apply it in action is a whole other skill set.”

Quatman said Marquardt’s ability to compete at a high level in the triathlon while balancing the complexity of medical school shows his focus and dedication.

“What’s really impressive about Matthew is he continues to teach me daily on how to approach life and do hard things,” Quatman said. “He’s very disciplined and action-oriented and truly an inspiration.”

Next year, Marquardt said he plans to compete as a professional triathlete rather than an amateur.

“Winning the Ironman World Championship as an amateur was obviously a huge accomplishment and something I’m very proud of, but I think it also just makes me that much more hungry to go against the pros and see where I truly am against the best,” Marquardt said.