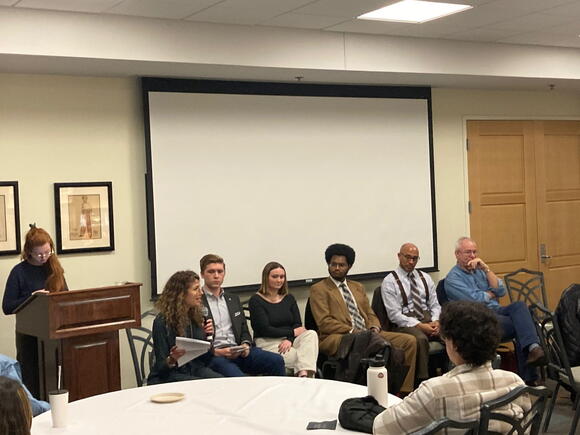 Students, faculty and the public gathered Monday for “Looking Back, Looking Forward: Student Perspectives on the New Political Landscape,” to discuss the future of politics following the 2022 Midterm elections.

The event, hosted by the Law and Society Scholars program and the Center for Ethics and Human Values as a part of Ohio State’s Civil Discourse Project, opened with statements from a panel of students and faculty members. Each member of the audience then asked questions and presented their opinions on the upcoming political landscape, according to Ohio State’s Center for Ethics and Human Values website .

Anushka Das, co-chair of the Law and Society Scholars Issues Committee and who planned the event, said these conversations are important to keep people motivated to create change in times of difficulty.

“These are really, like, those crucial points in my young lifetime where they really inspire me, and that’s the part that, like, reels my apathetic self back in,” Das, a third-year in psychology and philosophy, politics and economics, said. “It’s like, ‘OK, you know, there is hope, and I don’t have to be apathetic, and I can work towards bringing about change.’”

Das said she hopes these conversations can restore hope in others.

Dana Howard, an assistant professor in the Department of Philosophy, said during the event,  many voters cited the Supreme Court’s ruling in Dobbs v. Jackson Women’s Health Organization — which overturned Roe v. Wade and removed federal protections for the right to an abortion — as an important issue when casting their votes.

“In all four states where voters were asked to vote directly on state initiatives regarding abortion access, about 4 in 10 said that the Supreme Court decision [to] overturn Roe, and, had a major impact on their decision to turn out to vote,” Howard said.

Hasan Kwame Jeffries, an associate professor in the Department of History, said during the event Dobbs v. Jackson Women’s Health Organization played a role in motivating young people to vote, including exposing them to political turmoil — a state of confusion, disorder or uncertainty.

Jos Raadschelders, an associate dean for faculty in the John Glenn College of Public Affairs, said during the event he believes people must remember to be hopeful and participate in democratic processes as much as they can.

“I want to make sure that people remember that there is hope, and that even the littlest thing — a vote or a small action — can make a difference,” Raadschelders said.

“Ohio is such a big, vast place, and there’s so many different people coming from lots of different experiences,” Howard said.

Kaia Woodford, a fourth-year in political science and African-American and African studies, said the conversation was valuable and productive.

“I’m hopeful in sharing community with individuals who I respect and who are passionate about politics and engaging,” Woodford said.