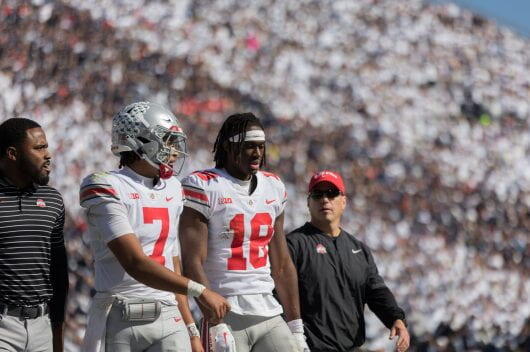 Stroud is in contention for the Maxwell and Davey O’Brien awards, which are awarded to the best player and the best quarterback in college football, respectively.

Harrison joins Iowa State redshirt senior wide receiver Xavier Hutchinson and Tennessee junior wide receiver Jalin Hyatt as finalists for the Biletnikoff Award, which is given to the best receiver regardless of position in the Football Bowl Subdivision.

This is Stroud’s second consecutive season earning a finalist spot for the O’Brien Award and his first time in contention for the Maxwell Award.

In 12 games this season, the Inland Empire, California, native has completed 66.2 percent of his passes for 3,340 yards, 37 touchdowns — which is tied for the most in the country with Houston senior quarterback Clayton Tune — and an FBS-best 176.25 passer rating.

Harrison built off his three-touchdown performance in last year’s Rose Bowl with one of the better seasons in Ohio State history. His 72 receptions are the sixth-most in a season for an Ohio State pass-catcher, as his 1,157 yards and 12 touchdowns are fourth- and tied-for-fifth-most in program history, respectively.

The winners of all three awards will be announced on ESPN’s Home Depot College Football Awards show Dec. 9 at 7 p.m.