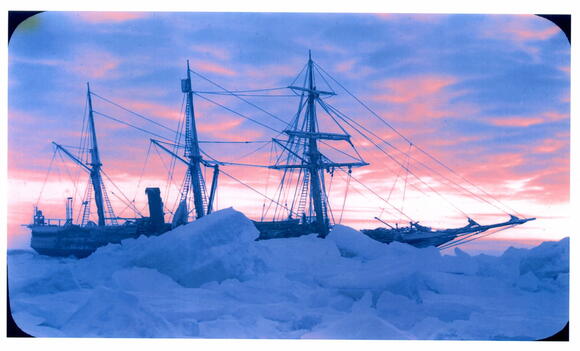 Heroic rescue is at the heart of “South,” a 1919 documentary by photographer Frank Hurley, which will be screened at Wexner Center for the Arts Tuesday at 7 p.m.

Considered one of the first-ever feature-length documentary films, according to The Wexner Center, “South” is an in-depth exploration into Sir Ernest Shackleton’s historic Trans-Antarctic expedition that took place 1914-17 in which Shackelton aimed to be the first mission to successfully cross the Antarctic.

The expedition ended in disaster but is known for a brave survival and rescue mission by Shackleton and his team, which saved every life on the ship, according to the Wexner Center. One of the lives was Hurley’s, who photographed the journey and upon return, compiled it all together in what became “South.”

Laura Kissel, polar curator at Ohio State’s Byrd Polar and Climate Research Center, said Shackleton’s adventure is well known despite many not having much familiarity with the history of Antarctic expeditions.

“People are naturally fascinated with the story of Shackleton and the fact that he didn’t lose any expedition members on this really dangerous journey,” Kissel said.

Shackleton and his crew had to abandon their sinking ship “Endurance” and camp on ice before making their way to the Elephant Island — located in the Southern Ocean — in lifeboats, all of which is covered in “South,” Kissel said.

Shackleton and five other members then advanced to South Georgia in an open boat for 800 miles and returned to Elephant Island with help. Hurley stayed back in Elephant Island, and “South” leaves the experience of that journey up to the audiences’ imagination.

Dave Filipi, the director of the film and video department at the Wexner Center, said the value of the film is as much in its real-life component as it is in the quality of Hurley’s photographic work.

“Hurley was this incredibly talented photographer, and the imagery is stunning,” Filipi said. “It’s visually impressive and beautiful to look at, but when you think about what it’s recording — their lives were in danger in the most godforsaken part of the world — and he has a record of it.”

Filipi said it’s a miracle the original footage of “South” exists, let alone a restoration suitable for modern audiences. Not only did Shackleton go back into icy waters to retrieve the footage and photographs, but ice was used to preserve the records during the camping period.

“It’s hard to think of something like that today,” Filipi said. “The thought that people would be stranded in such a way where your life would be in danger while filming it, it’s hard for contemporary audiences to put themselves in that place.”

Kissel said “South” conveys the large magnitude and scale of the journey for the time period well for all kinds of modern audiences, whether they are intrigued by filmmaking, scientific research or history of explorations.

“It’s attractive to a lot of different interests,” Kissel said. “And who doesn’t love a good hero story? I’m telling you the ending before you see it, but they all live. Who doesn’t love that?”

Modern audiences go-to digitally created fictional worlds now for heroic cinema experiences, but the courage and heroism of the men in “South” is as real as it can be, Filipi said.

Filipi said that exploration and scientific discovery are no longer treated as a public priority the way they were back then, and “South” serves as a link to that era.

“We figured out a way to live in the elements down there so that part of it is longer a big deal,” Filipi said. “But somebody had to be the first to go down there and start figuring that stuff out, and Shackleton wasn’t the very first but he was among the first — because this film exists, we have that connection to the time period.”

Kissel said those interested in Shackleton’s work can find it at Scott Polar Research Institute at Cambridge University.

The screening scheduled at Wexner is the newest digital remastering by the British Film Institute on  the 100th anniversary of Shackleton’s death.

Tickets are available to purchase online, starting at $5 for students, $7 for members and seniors and $9 for the general public.