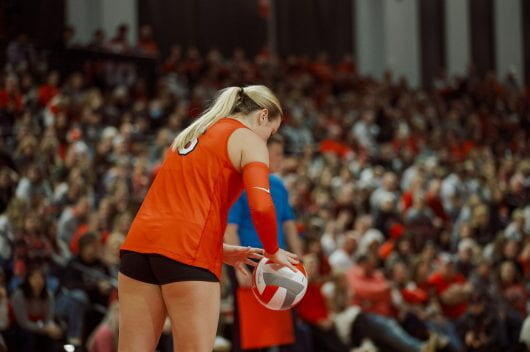 The No. 8 Ohio State women’s volleyball team’s 14-match winning streak snapped at the hands of Maryland, but senior defensive specialist Kylie Murr walked away the holder of a program record.

León said in an email after meeting Murr, she saw her competitive spirit and knew she would do big things as a Buckeye.

“She’s one of the best liberos in the country, a great leader and a huge competitor, that’s why I’m not surprised at all that she’s now the all-time digs leader at OSU,” León said. “Nobody is more deserving than her.”

The Yorktown, Indiana, native collected her career high in digs the same match she passed the record by collecting 35, tying León for third highest single-game total in Ohio State history.

Senior outside hitter Gabby Gonzales said Murr’s presence is something the Buckeyes rely on to keep the team engaged on the next point. Gonzales said having a competitor like Murr on the floor helps keep the rest of the team locked in, and having someone as consistent as Murr was “great.”

“I feel like Kylie is overlooked sometimes because she is so good all the time,” Gonzales said. “We don’t always give her the recognition because she’s just always at level 10. But she’s always bringing her voice, she brings the fire. The play is awesome, but the things you don’t see off the court are what make her an even better teammate.”

Murr is not a stranger to holding program records. In her freshman season, she averaged 4.9 digs per set and tallied 559 on the year, the most in a single season in program history.  This season she had 474, averaging 4.799 per set, which ranks second of all time and pushes her .421 per-set rate from Murr’s 2021-22 campaign to third.

Murr said holding the all-time record seemed improbable because her sophomore season was limited to only Big Ten play due to the COVID-19 pandemic.

“I really didn’t know this was possible, and then I started creeping up there a little bit, and I was like, ‘This could really happen,’ and the competitor in me is like, ‘Oh I’m getting it,’’’ Murr said.

Murr said she puts everything she has into volleyball every time she steps onto the court.

“My voice is needed, so I can’t slip off to the side or go behind the scenes because that’s not what my team needs, and I can bring that for them,” Murr said.

Murr said one of her favorite moments as a Buckeye was the sweep against Nebraska Nov. 4, 2021, at the Covelli Center.

“It was such a team win, so gritty, and it was fun to be at home, but this season in particular beating Minnesota in Minnesota is something I’ll cherish forever,” Murr said.

Murr said that the all-time record was never her goal, but she is appreciative of the groundwork laid by those before her.

“The people that I have somehow passed are legends,” Murr said. “Without them putting those numbers up on the board, I wouldn’t be in the situation I am today.”