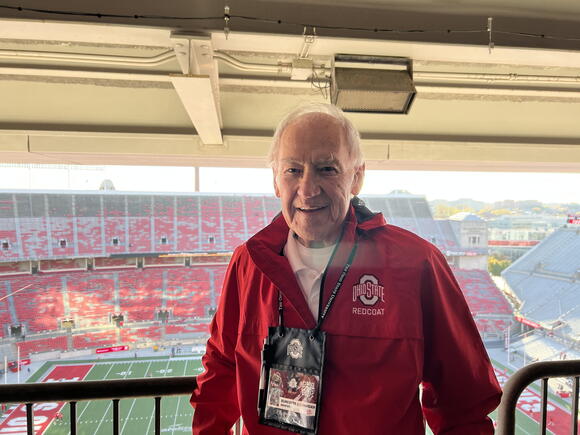 For Schneider, the license plate has a deeper meaning.

“That was my number on the Ohio State football team,” Schneider said.

Schneider first made his mark on Ohio Stadium playing on the 1957 freshman football team and since 2004 has made the media feel at home as the redcoat on duty of the 100-year-old ’Shoe’s camera deck.

At the age of 84, Schneider said he considers the stadium his home away from home.

“Ohio State football was all I ever grew up knowing,” Schneider said. “My uncle started taking me out recruiting [at Ohio State] when I was a freshman in high school.” 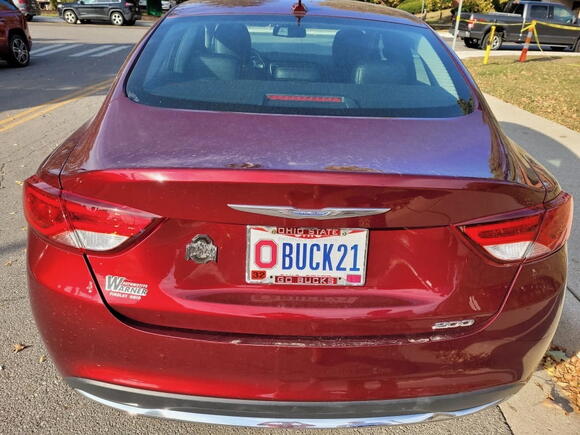 Schneider, who said he was given the nickname “BeeBe” because his German immigrant grandfather was nicknamed “Bullets,” played football, baseball, basketball and track at Fremont Ross High School in Fremont, Ohio.

It was at Fremont Ross where he was recruited to play football at Ohio State, enrolling in the fall of 1957 to play on the freshman squad for then-head coach Woody Hayes’ program.

That year, Schneider said he played on the scout team running plays for the varsity team that won the Rose Bowl later that season.

Schneider finally had his chance to play at Ohio Stadium later that year in the annual matchup between the freshman and junior varsity teams.

The freshman team lost the previous 20 games to the junior varsity teams, Schneider said. But this time, he got the chance to lead his team to victory.

Schneider said he fumbled the snap on a handoff to his running back, but picked up the ball and took off.

“I went around the end into the north end zone to score the touchdown, and we won 18-14,” Schneider said.

Schneider said he left Ohio State due to finances.

“When you don’t have anything and money plays a factor, you go,” Schneider said.

Schneider returned to football playing for the Toledo Tornadoes of the now-defunct United Football League in 1962.

That same year, he injured his knee — ending his athletic career.

“I really couldn’t do anything with that left knee,” Schneider said. “I knew my athletic days were behind me.”

Schneider said he joined the National Guard after his playing days ended. After eight years of service, he then became a salesman for Sunoco Oil and later served as regional manager of consumer relations for Cooper Tires.

But when retirement came in 2004, all roads led back to Ohio State, where he got his start.

Schneider has not left since.

Redcoat supervisor Mike Fisher said Schneider’s role is to make sure the camera deck is secure and clean, while taking care of its radio and camera crews each week.

“He’s good with the public and enjoys what he does,” Fisher said. “He helps everybody up in that area and always does it with a smile.”

As a player, Schneider competed in the same backfield as future captain Jim Herbstreit. Sixty-five years later, Schneider worked on the same level as Herbstreit’s son Kirk Herbstreit, now in his 26th year as an analyst for ESPN and ABC.

The chance for a full circle moment is “something you never even dream of,” Schneider said.

When he is not at the stadium, Schneider helps manage a Culver’s restaurant in Findlay, Ohio. Schneider said some weeks he works up to 40 total hours.

Schneider said he also enjoys spending time with Ruth, his wife of 40 years, and his three grandchildren.

“What keeps me going is what I’m doing,” Schneider said. “I see too many people that retire, do nothing, and they’re gone.”

Working in Ohio Stadium has “meant the world” to Schneider, who said he leaves for the stadium each Saturday at 3:30 a.m. no matter the start time.

“The atmosphere and being part of it” is what Schneider loves most about the ‘Shoe.

“I always tell people about [Ohio Stadium] on Saturdays,” Schneider said. “You can’t experience what it is until you’re there.”