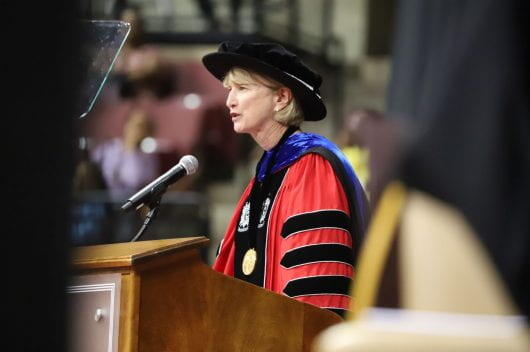 The email comes after reports of her resignation from The Columbus Dispatch. Johnson’s tenure as president will end after commencement in spring 2023, she said. In her email, Johnson thanked and offered her “deepest gratitude” to students, faculty members, and staff members who helped reach the goals and objectives achieved under her leadership.

“It’s been a privilege to serve this incredible university, and I have been honored to work as part of this brilliant, dedicated and passionate community,” Johnson said in the email.

Johnson said the past several years at Ohio State have brought personal satisfaction for her and her wife Veronica Meinhard.

“We want to thank the amazing students, faculty and staff of Ohio State, the alumni, parents, supporters and all of Buckeye Nation, including my cabinet and the Board of Trustees, for the camaraderie you have shown us as we reached new heights together,” Johnson said. “We wish all of you — and The Ohio State University — the very best in the future.”

Johnson did not state why she was resigning in the email. According to reports from The Columbus Dispatch, the Board of Trustees asked Johnson to resign following an investigation conducted by an outside firm after concerns were “raised by her staff.” Details of the investigation are not yet known.

However, University spokesperson Ben Johnson said in an email there was not an investigation into Kristina Johnson. An outside consultant was “engaged to assist with the president’s performance review, as has been done in years past.”

“The board was aware of President Johnson’s intent to leave the university advance of the November board meeting and therefore an annual review was not completed,” Ben Johnson said.

The Board of Trustees will search to select a new president, according to a press release . More information about the search will be shared in early 2023.

Dr. Hiroyuki Fujita, chair of the Board of Trustees, said in the release the board thanks Johnson for her work at the university.

“On behalf of the entire Board of Trustees, I want to thank Dr. Johnson for her dedication to the university, especially her leadership during the COVID-19 pandemic,” Fujita said. “We congratulate her on her many achievements and wish her our very best in her future professional endeavors.”

Kristina Johnson said she had a vision of becoming “the absolute model of a land-grant university” embodying “its historical missions of access, equity and outreach in new and creative ways.”

Kristina Johnson was appointed in 2020 to replace former University President Michael V. Drake. Kristina Johnson would be leaving two-and-a-half years into her five-year contract, which would be the second-shortest tenure for any university president, according to an Ohio State website.

Before arriving at Ohio State, Johnson was Chancellor of the State University of New York and served as undersecretary of energy under the Obama administration.

Kristina Johnson currently earns $927,000 yearly, according to the university’s salary database. Kristina Johnson received a $263,500 bonus in 2021 with a $27,000 salary raise but did not earn a bonus this year.

Kristina Johnson’s tenure as president began during the COVID-19 pandemic . While she was president, the university enacted policies, such as weekly COVID-19 testing, vaccination rollouts and requirements, masking policies and the relaxation of university-enforced mandates this semester.

Kristina Johnson apologized “on behalf of the entire university” at a university Board of Trustees meeting Nov. 17.

In Kristina Johnson’s first semester as president, Chase Meola — a fifth-year in marketing from Mahwah, New Jersey — was shot and killed at an off-campus party Oct. 11, 2020. Meola, a former member of Ohio State’s Delta Phi Psi chapter, was 23 years old at the time.

Two years after the anniversary of Meola’s death, his parents Margaret and Paul Meola filed a lawsuit against Ohio State for failing to “reasonably control or otherwise stop the partying, alcohol consumption, and the presence of Greek life” in the University District. Further information about the lawsuit is still unknown.

In response to an increased number of crimes, Kristina Johnson announced September 2021 the university would invest $20 million into safety measures over the next decade. According to the university’s Community Crime Map, Ohio State’s on- and off-campus areas show a decrease in major crime in 2022 compared to last.

These safety measures, which went into effect immediately, included the expansion of off-campus patrols and the addition of permanent lighting fixtures. Under Kristina Johnson’s leadership, the university created more staffing for the University Police Department and campus security teams, like the Community Crime Patrol.

In May, as part of the Scarlet and Gray Advantage program — an initiative to provide debt-free education — Kristina J ohnson and Meinhard, donated $1 million to Ohio State to fund two scholarships for first-generation students and student-athletes.

The university announced its end to the Digital Flagship iPad distribution program — initiated by Drake in 2017 — in April. However, the new approach to Digital Flagship includes a technology loan program for iPads and Surface Go kits as well as free Adobe Creative Cloud access and degree-specific software for students.

Kristina Johnson has pushed to achieve carbon neutrality by 2050 but hoped to accelerate the plan to finish by 2040. She said Nov. 2 she was hoping to start by putting more solar panels around campus.

Kristina Johnson also announced the start of the Drug and Alcohol Training program in July, which is required for incoming first-year and transfer students and encouraged for other students. The modules cover alcohol use and misuse and prescription drug safety.

Kristina Johnson has served as the Big Ten Representative for the College Football Board of Managers since May after taking over for former Penn State President Eric Barron. Kristina Johnson told The Lantern Nov. 2 she supports student-athletes’ options to own their names, images and likenesses and to take advantage of the transfer portal.

In 2021 , Kristina Johnson started the Race, Inclusion and Social Equity initiative, meant to hire 150 diverse tenure-track faculty in the coming years. At least 50 of these hires are meant to address social equity and racial disparities in areas such as health care, education, justice and public safety.

The story has been updated at 7:18 p.m. to include University President Kristina M. Johnson’s statement and also Nov. 29 at 11:39 a.m. to include a statement from university spokesperson Ben Johnson.