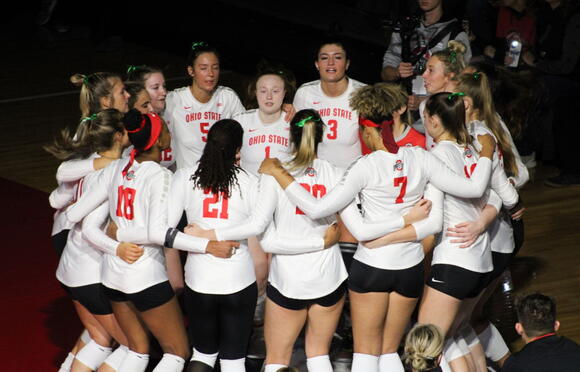 The No. 8 Ohio State women’s volleyball team fell in four sets each to No. 9 Minnesota and No. 3 Wisconsin this weekend.

Senior outside hitter Gabby Gonzales and six other seniors were honored following both of their final two regular-season matches.

“I’m just thankful,” Gonzales said. “It’s easy to celebrate when you’re surrounded by so many good people. It’s not about the win or the loss at the end of the day.”

Ohio State’s Big Ten title hopes ended after its final match against the Golden Gophers (19-8, 14-5 Big Ten) Friday at the Covelli Center behind redshirt-sophomore outside hitter Taylor Landfair’s 25 kills in a tight 3-1 thriller.

The Buckeyes took the first point of its two senior nights on a kill from junior outside hitter Emily Londot but fell behind 4-1 after a short Golden Gopher run. Ohio State tied the set at seven and then eight, before taking a 9-8 lead and after holding off Minnesota to win 25-20.

“Landfair was pretty great tonight,” head coach Jen Flynn Oldenburg said. “She responded from last time, and our defense wasn’t as great as it normally is.”

They started the second set tied at one, two and three points before Ohio State took a 10-8 lead. A six-point Golden Gopher run flipped the lead 14-10, and Minnesota pulled ahead and prevailed 25-21.

“I feel like they had some blocks in key moments,” Oldenburg said. “We had some errors and not so great moments, but it comes back to our movement, voices and confidence.”

Both squads used timeouts to squash early runs, but the Buckeyes called their second after three- and four-point runs gave Minnesota a 16-14 lead in the third set.

Ohio State came out of the timeout with a three-point run to take the lead 17-16, and a five-point Gopher run flipped the lead once more as Minnesota held on 25-21, taking a 2-1 set lead.

Ohio State hit .233 and .227 in the second and third sets, collecting 15 kills in each. Junior middle blocker Rylee Rader added six of her 13 kills in the frame, but Lainfair’s 25 kills led all players.

“We have so many weapons on our side, two great middles, two great pins, great right side, great setter, great libero,” Gonzales said.

The Buckeyes scored first to open up a tight fourth set, as Minnesota took its first timeout after seven ties and two lead changes at 14-12.

Ohio State hit .239 as a team, collecting 65 kills, one more than the Golden Gophers.

“We’re trying to get better at all aspects of the game, and it’s important to note that teams get better at this point in the season,” Gonzales said.

The Buckeyes dropped their fourth-straight match against the Badgers (25-3, 19-1 Big Ten) Saturday at the Covelli Center 3-1.

The opening set of the regular-season finale proved close as the teams tied 12 times and swapped the lead five times. Wisconsin took the lead halfway through a four-point run at 19-16, and the Buckeyes did their best to rally but dropped the set 25-22.

The Badgers defense held strong, allowing a .122 hitting percentage from Ohio State and forcing 11 errors from an offense averaging .253 on the year. Londot had five kills in the set, leading all players.

“When we play separately we don’t do as good of a job, but once we figure out how to play together and that’s a switch that has to come from within the team,” Podraza said.

The Badgers jumped ahead 5-0, causing Ohio State to call its first timeout of the second set. The Buckeyes scored out of the timeout but could not climb out of the deficit, falling behind by a set-high eight points and dropping the set 25-18.

Wisconsin redshirt sophomore outside hitter Sarah Franklin had three kills in the set and 12 for the match.

“I reminded the team that we need to stop putting so much pressure on ourselves, play one point at a time, be super present,” senior defensive specialist Kylie Murr said

Ohio State denied a sweep, tying the set a three and taking the lead 5-4 during the first of two four-point runs. The Buckeyes would not surrender the lead, going on a five-point run and extending the lead to eight before holding on to win 25-19.

Wisconsin grabbed a 2-0 lead in the fourth set, but the Buckeyes tied it all at two and then three before the Badgers scored six-consecutive points. Ohio State brought the score to 17-16 on a Londot kill, but three points from the Badgers ended the set 27-25 and the match 3-1.

Ohio State held the Badgers under .200 in the set. The Buckeyes stayed in their system more often in the set because of the way they received, committing one error while getting 24 digs.

“It wasn’t the outcome that we liked, but that was Buckeye volleyball,” Gonzales said.

Oldenburg said senior nights are always hard, and losing this group of seniors was especially difficult. Regardless, she said the team is ready for the NCAA Tournament.

“That talk was happening in the locker room after the match,” Oldenburg said. “We’re ready to move forward and we get a fresh start with new opponents. We have to beat them all.”

The No. 3-seed Buckeyes will host Tennessee State in the first round of the NCAA Tournament at the Covelli Center Friday at 7:30 p.m.