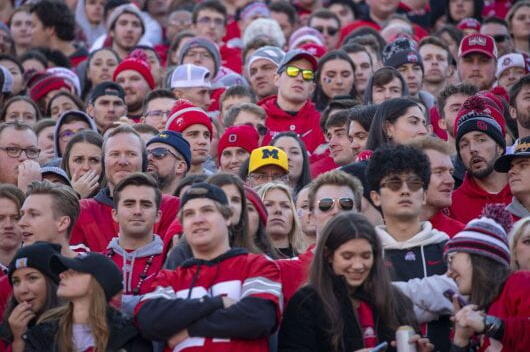 The Woody Hayes Athletic Center has a clock counting down to the annual football game between Ohio State and Michigan. Throughout the 2010s, the clock counted down for seemingly imminent victory for the Buckeyes, after winning eight straight matchups from 2012-19.

However, for the second-consecutive season, the clock signaled a victory for Michigan. After the No. 2 Buckeyes fell 45-23 to the No. 3 Wolverines Saturday, head coach Ryan Day seemingly had no answers for back-to-back losses against the rival known in Columbus as “that team up north.”

“Hard to say right now, because this is not the outcome that we all envisioned,” Day said. “I thought we had a really good preparation. I thought we were building towards playing really well in this game, and we were fighting there in the first half. And I felt really good going into the second half, and we just didn’t execute well enough in the second half.”

Depending on the definition of “execution,” the Buckeyes failed to carry out any effective plays after halftime, scoring three points and getting flagged for six penalties in the frame. The Wolverines averaged 8.8 yards per play and scored 21 points in the fourth quarter, showing aggressiveness Day’s team seemed to lack.

Day said he thought his team played well but knows the responsibility for the loss falls on him as head coach.

“I thought we were fighting out there, but in the end, we came up short,” Day said. “I certainly know what this game means to everybody, and when you lose, it all comes back to me. I’m the head coach, and that’s what probably hurts the most.”

The Buckeyes defense entered the matchup ranked 10th in the Football Bowl Subdivision allowing 16.9 points per game. The Wolverines — led by sophomore quarterback J.J. McCarthy’s four total touchdowns — torched the Ohio State secondary with four passes of at least 30 yards, including two scores that went for at least 60.

Knowles said the Buckeyes wanted to be “on top of the run” in the first half and not panic over the big plays in the first half. But in the fourth quarter, Michigan sophomore running back Donovan Edwards went for 75- and 85-yard touchdown runs, showing the Buckeyes could not stop the wounds despite applying band-aids.

Knowles said he takes blame for the Buckeyes being unable to prevent big plays, saying the game was defined by Michigan’s explosive offense.

“It’s a story of explosive plays,” Knowles said. “I thought we matched through the course of the game. But too many explosives. That’s what’s disheartening, for not just the defense, but the team, the fans, and then I have to take responsibility for that.”

The problem didn’t solely lie in playcalling on either side of the ball, but Ohio State’s discipline. Entering “The Game,” the Buckeyes averaged 5.4 penalties for 45.8 yards per contest, and Saturday they were flagged for nine penalties and 91 yards in the contest.

The lack of discipline, which included two unsportsmanlike conduct and pass interference penalties, led to the Buckeyes giving up valuable field position. On their opening drive in the third quarter, Stroud found third-year running back Chip Trayanum for a 24 yard gain.

However, the play was wiped out by a holding penalty and an unsportsmanlike conduct on third-year tight end Gee Scott Jr., and the Buckeyes faced a rare 1st-and-35. Despite the offense cutting it down to a more manageable 4th-and-7, Day elected to punt the ball to the Wolverines.

Stroud said he trusts his coach, but personally wanted to go for the first down while up three points.

“Coach Day felt like it wasn’t smart going for it on fourth there,” Stroud said. “I wanted it. I wanted to go for it really bad. I still think I’m one of the best players in the country and can make that play. I think in those type of moments I want the ball. I want to do things. But I have to trust coach Day, and I do.”

While Day owns a 45-5 career record at Ohio State, the team seems to lack cohesiveness when matching up with a similarly talented opponent. All of Day’s losses have come to then-ranked teams, including two in the College Football Playoff and now, Michigan.

With the clock in the Woody Hayes Athletic Center now standing at 363 days, the Buckeyes have to endure amplified questions and criticisms leftover from last season. If they are unable to address the Wolverine-sized obstacle in their path towards another national championship next season, the clock may count down to a reshuffling of the program itself.