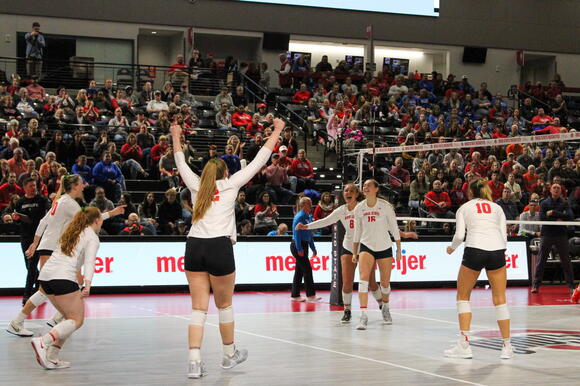 The No. 6 Ohio State women’s volleyball team defeated Purdue 3-1 on Thursday in a Big Ten matchup. Credit: Amanda Bovenzi | For The Lantern

The No. 6 Ohio State women’s volleyball team extended its winning streak to 13 games in four sets at No. 15 Purdue Thursday.

Senior outside hitter Gabby Gonzales opened up the match with a kill, and the Buckeyes (18-5, 14-1 Big Ten) found themselves with a 16-9 lead following the Boilermakers’ ( 18-7, 9-6 Big Ten ) second timeout. Purdue scored out of the timeout but were outmatched 9-5 down the stretch, and Ohio State won the set 25-14.

Ohio State had 15 kills on 33 attempts in the first set and collected its match-high 19 team digs. The Boilermakers went 8-38 and had a sub-zero hitting percentage.

Purdue got out to an early 5-2 lead in the second set, but Ohio State battled back to tie at 10, 11 and 12 points. The Boilermakers fought off Buckeye attempts to tie the match, with Ohio State never trailing by more than three and took the second set 25-23.

Boilermakers freshman outside hitter Eva Hudson collected a team-leading 13 match kills and three in the set.

Ohio State responded by scoring the first three points of the third set and taking a 16-9 lead by the second Purdue timeout. The Buckeyes took control of the match 2-1, winning 25-16, behind a match-high 19 team kills while allowing 13 from the Boilermakers.

Ohio State had one error in the set, while having a .559 killing percentage. Senior outside hitter Jenaisya Moore had eight of her 17 kills of the night.

With her 21 digs on the match, senior defensive specialist Kylie Murr is now 35 off the all-time career lead of 1,790 in program history.

Junior outside hitter Emily Londot had 19 kills and 11 digs and Gonzales had 18 kills and 19 digs.

Ohio State’s next match is at the Covelli Center Sunday against No. 4 Nebraska. Play begins at 4:30 p.m. and will broadcast on Big Ten Network.