Football: ‘Nothing I’ve been a part of before’: How Ohio State special teams weathered dreary conditions at Northwestern 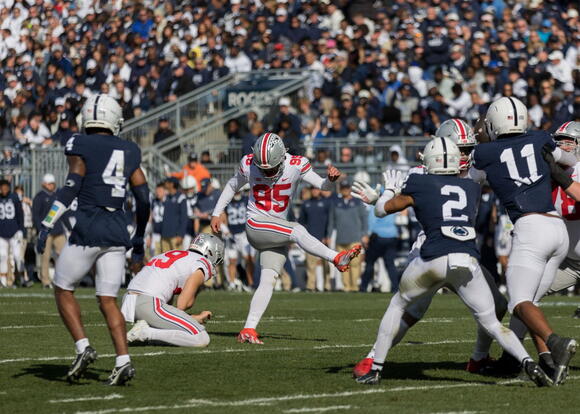 Second-year long snapper Mason Arnold’s second-career start for the Buckeyes began with conditions the Tampa, Florida, native had never played in before — rain and winds that reached 50 mph.

No. 2 Ohio State managed a 21-7 win at Northwestern last Saturday in unfavorable weather, limiting the Buckeyes to a season-low 76 passing yards and no field goals. Arnold said he and the special teams unit had to find ways to “just get the job done.”

“It was the worst conditions I’ve ever had to deal with in my life and my career just snapping in general,” Arnold said. “Being from Florida, we have pretty crazy storms, crazy lightning and all that, but when that happens, we don’t play through that. The rain — it wasn’t crazy severe, but it was constant and continuous, and that definitely made it more difficult for sure to do my job.”

Arnold said the mental toughness it took to perform against Northwestern took him back to his high school days as a wrestler when he was living by National Wrestling Hall of Famer Dan Gable’s words of, “Once you do wrestling, everything else is easy.”

Arnold still believes in Gable’s words, carrying them with him in his first-career starts at Penn State Oct. 29 and Northwestern Nov. 5, after graduate long snapper Bradley Robinson suffered a leg injury against Iowa Oct. 22.

“In wrestling, there is such a mental game that is crazy, because you’re out there on the mat by yourself competing against one other guy, and everybody else is watching,” Arnold said. “I relate that a lot to being a specialist. I mean, I’m out there holding the ball, and eyes are on, so I feel like wrestling has prepared me so much to be a specialist.”

While second-year punter Jesse Mirco’s hometown of Fremantle, Australia, is far from Arnold’s Sunshine State, Mirco said he had never seen such conditions either.

Mirco, who has experience playing Australian-rules football and performing at ProKick Australia, punted a season-high seven times on Saturday for an average of 50.3 yards and a total of 352 total yards.

“It’s pretty funny to be honest, nothing I’ve ever been a part of before,” Mirco said. “I feel like I got kind of the most I could have out of the situation. I think it helps being able to kick with my background. I like to kick the ball a bit lower, kind of, like, puncture a bit through the wind. I didn’t really have any other option, but that worked out.”

Head coach Ryan Day likened the weather conditions in Evanston, Illinois, to trying to play golf in 30-mph winds, as Saturday he said it’s “hard to get the ball off the tee.”

“There were times where I was concerned about the snap, coming back into the shotgun it was so windy,” Day said. “I can tell you right now, I’m glad this game is over with.”

Though this is only Mirco’s second game working with Arnold, he said the pair have reps banked from time in practice and during training camp.

Mirco’s performance on Saturday earned him a nickname by his new long snapper: “wizard.”

“For Jesse to go out and perform the way he did in that condition is unbelievable,” Arnold said. “He’s so great at what he does, and he puts our team in such a good position in the kicking game. Sometimes I call him a wizard or a magician, just the way he kicks the ball.”