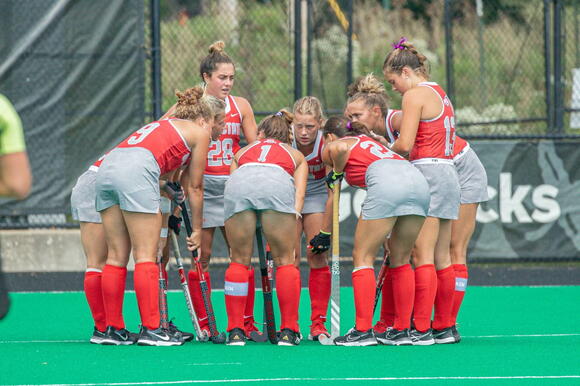 “It’s pretty exciting,” Charley said. “Hopefully this will keep the momentum going, especially for a couple more of the Big Ten games that we have coming up.”

The Buckeyes shut out the Golden Flashes for junior goaltender Abby Danson’s fourth of the season and her first since Sept. 4 against Lehigh. Danson saved three shots faced in the game.

Head coach Jarred Martin is impressed with Danson this season.

“She has a great demeanor and poise back there,” Martin said. “She knows what she’s good at, and she knows what’s coming.”

The Buckeyes offense started early with a goal from senior midfielder Leanne Bough, who found the back of the cage for the second time this season with the assist by senior back Delaney Lawler.

Sophomore midfielder Claudia Thomas scored her third goal of the season in the second quarter unassisted to keep the offense going for Ohio State.

Martin said the team’s ability to spread out the production on offense this season has been very important.

“We have some pretty dynamic forwards up front,” Martin said. “Anybody has the skill, the speed, to have a chance, and when they’re having those chances, the confidence to bury it.”

Charley scored her first goal early in the third quarter off a penalty stroke awarded to the Buckeyes after a Kent State foul inside the circle.

Charley found the back of the cage for the second time in the fourth quarter with 6:31 left in the game. It was her fourth goal of the season, leading the Buckeyes.

Martin was happy with the Buckeyes’ ability to control possession in the game against the Golden Flashes.

“I was really happy with our backfield,” Martin said. “The ball speed was quick. I thought they were reading the Kent State press well, so we were able to hold possession and find pockets to get some passing going.”

“We just have to keep pushing through,” Charley said. “It’s not going to be an easy season.”

The Buckeyes will next host Central Michigan Friday at 7 p.m.