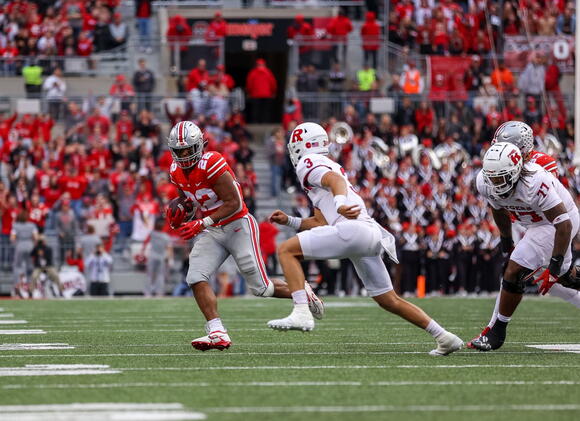 As Rutgers sophomore quarterback Evan Simon dropped back and threw a pass with less than 30 seconds remaining in the third quarter Saturday, fourth-year defensive end Zach Harrison tipped the football where it dangled in the air for the lone Buckeye in the area.

Fourth-year linebacker Steele Chambers jumped and snagged the takeaway, his first of the season, and returned it 12 yards. Chambers recalled his days as a running back after catching the ball, detailing the second interception of his career.

“I saw a bat; I caught it,” Chambers said. “Kind of caught it by the tips, which felt really weird, so that’s where it really messed me up at first. And then after that, I just ran and then got tackled.”

Since converting full-time from running back last season following his first two seasons playing the position at Ohio State, Chambers has exceeded expectations, finishing fifth among Buckeyes with 47 tackles a year ago.

Chambers recorded 11 tackles and two for loss, both career-highs, in the No. 3 Buckeyes 49-10 win over Rutgers. His outing followed a Week 4 performance in which he brought down six tackles in a 52-21 victory over Wisconsin, saying Saturday may’ve been one of his best displays as a linebacker.

“I felt like that, especially from last week, I’ve definitely improved. Just trusting the defense and just doing my assignments,” Chambers said. “I think that was one of them.”

Chambers is second among Buckeyes with 30 tackles this season, adding two passes defended and a sack.

Harrison said he’s seen Chambers range across the field to make stops this season, often coming down with “a good play for a linebacker to make.”

“Steele is like sideline to sideline,” Harrison said. “That’s Steele’s strength, and Steele is good in pass coverage. He’s a great, great linebacker and asset for us.”

Defensive coordinator Jim Knowles is leaning on Chambers and fourth-year linebacker Tommy Eichenberg to solidify his scheme of five defensive backs, four defensive linemen and two in the middle.

Head coach Ryan Day said he thinks Knowles’ defensive mind and knowledge in the linebackers’ room helps Eichenberg and Chambers, particularly for the latter to find where he can best showcase his strengths.

“I think they feel comfortable in the scheme,” Day said. “I think they really have a good relationship with Jim Knowles, who they meet with every day, and he’s their position coach. I think he gives [Chambers] really good perspective on how he fits into the run, but also in the pass game, and that’s huge.”

Chambers said Knowles’ scheme allows the Buckeyes to “play offense on defense,” and that’s shown across five games this season in which Ohio State has allowed just one opponent to eclipse more than 300 yards of offense.

Now more than a year into committing as a linebacker, Chambers is reliably holding down what’s needed at the position. He said Ohio State’s “aggressive” mentality on defense helps him find ways to thrive.

“Just trusting my assignments,” Chambers said. “Really just doing what’s needed for the defense and then coach just puts us in spots to make plays.”