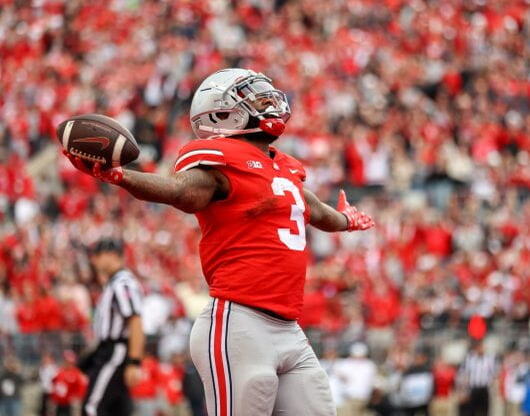 Williams is the first Buckeye since Keith Byars in 1984 to rush for five touchdowns in a single game, and only the third overall. The Cincinnati native rushed for career-highs on a day where second-year running back TreVeyon Henderson did not play a down after a game-time decision .

“I think that’s something we need,” Stroud said. “We are pretty dynamic on the outside, and we do a great job on the inside protecting. When we can run the ball that good and connect on some of the plays we weren’t doing in the past games, and it’ll be a recipe for a win and success.”

Williams took the majority of carries for the Buckeyes and set additional career-highs with 189 rushing yards on 21 attempts. Prior to Saturday’s game, Henderson and Williams shared the load evenly, with the two running backs ranked 10th and 11th among Big Ten rushing leaders, respectively.

Henderson participated in pregame warmups, and head coach Ryan Day said he did not look good. But the junior tailback from Winton Woods High School assured his coach and fellow halfbacks he’d carry the load.

“I told Trey ‘I got you, I got you today,’” Williams said. “And it’s a blessing to be up there with the names, those legends here.”

Although the Buckeyes are stretched thin with injuries to offensive weapons, such as Henderson and third-year wide receiver Jaxon Smith-Njigba, the former three-star prospect is filling in nicely with every opportunity he gets. Day said he’s impressed with how Williams kept Ohio State’s offense on schedule.

“Miyan was running hard today,” Day said. “He turns a 3-yard run into five. It was tough down there in the red zone, and they dug in a few times. We had to go for it on fourth down, but Miyan had a really good day for us.”

With the extent of Ohio State’s injuries unknown, Day and his staff look to rely on Williams and other offensive weapons, such as second-year receivers Marvin Harrison Jr. and Emeka Egbuka, to produce when their numbers are called upon.

If Williams continues to receive the majority of carries, Ohio State may see another Heisman Trophy candidate emerge from its offense.