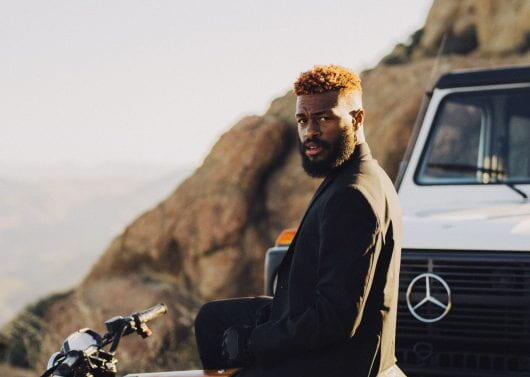 Duckwrth is to perform in Columbus Oct. 4 as one of the many stops in his “Chrome Bull” tour. Courtesy of: TCB Public Relations

Musician Duckwrth has found his life’s purpose in performing.

The Los Angeles-based singer and performer Jared Lee, better known as Duckwrth, has made a name for himself in the world of hip-hop and R&B with a sound that blends styles to make them uniquely his own.

Duckwrth has amassed over 400 million streams worldwide, with nearly 3 million monthly listeners, according to his Spotify . His song “Start a Riot” featured in “Spiderman: Into the Spiderverse” has over 100 million streams alone, with other popular songs such as “MICHUUL” and “Crush” following closely behind. Duckwrth has toured with Billie Eilish, Anderson .Paak, N*E*R*D and Flying Lotus, but he said he has decided to step out on his own for his “Chrome Bull” tour.

The “Chrome Bull” tour’s namesake comes from his upcoming extended play  “Chrome Bull” that was originally supposed to be released before the tour began. However, Duckwrth said he postponed the release of the EP to hopefully release it in the weeks to come.

“The writing hasn’t been working out and getting it to the best place has been kind of hard, which is so funny because music — art — it’s very much so spiritual based and you kind of just have to let it be,” Duckwrth said.

Duckwrth said he looks forward to the tour and meeting the variety of fans he has, especially because the show is touring in the cities with his largest fan bases.

Duckwrth’s work has also been featured in HBO’s critically acclaimed show “Insecure.” He said he felt honored to be recognized by show creator, Issa Rae, and feels their similar backgrounds have resulted in shared dreams and goals.

“We both come from the ‘hood, but two Black creatives who are just aspiring to telling the story,” Duckwrth said. “Sometimes the stories that are told from the Black experience can be very limited in a sense, because for so long, Hollywood wouldn’t allow our stories. So, for that, for a woman like her to recognize me, it’s extraordinary.”

The experience of growing up in a dangerous area in Los Angeles heavily influenced Duckwrth’s decision to become an artist and performer, he said.

“I was raised in South Central. So, I was in South Central for so long I just wanted to see what the world was like,” Duckwrth said. “Not even just like New York or like SF, but I really was just like, ‘I made that choice in my mind, I am going to travel the world for free.’”

However, Duckwrth’s goals include more than traveling. He said he also wants to learn about the world and people surrounding him to give back to the community, as areas like his native South Side often don’t get fair opportunities.

“So — cause and effect — it ends up being like a very specific experience, but that was the catalyst for me to go as far as possible you know, but also go as far as possible and then bring it back.” Duckwrth said. “For me, it would be a disgrace if I was taking in all these lessons, experiences, so much in the world and not be able to speak on these experiences back in the place where I came from.”

Duckwrth said he wants to bring his community at home some of the resources he believes are missing from neighborhoods like it.

Performing allows him to connect with people on a deeper level, which is his goal when getting up on stage, Duckwrth said.

“It just gives life purpose, and in that sense, I feel like I’ve been blessed,” Duckwrth said. “To have the certain skill set that I have, I was built to be a performer. I actually believe that. I was built to be able to reach a mass amount of people, and I think, for me, I’m pretty good at what I do.”

The “Chrome Bull” tour is to come to Columbus’ A&R Music Bar Tuesday at 7 p.m. Tickets are $22 presale and $25 at the door, according to PromoWest Live .

“It gives my life meaning and purpose, and it just feels cool to touch so many people at once,” Duckwrth said. “Just to dance with them, giving them music, giving kind of like a gift in that sense. To go about their day and have some type of positive music or feel-good music to play while they’re studying or taking a shower or driving their car.”