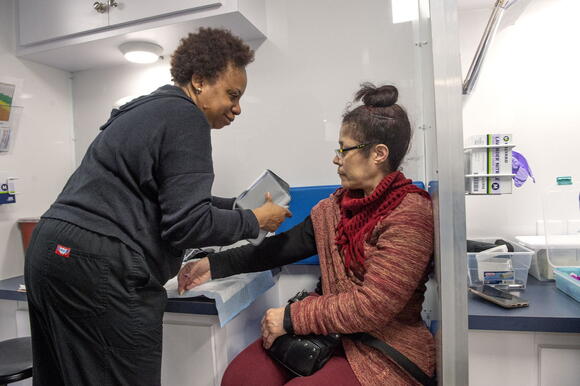 HARTFORD, CT – 03.12.2019 – HEALTH SCREENING – “I could probably lose a little weight,” says Luz Alicea, 57, of Hartford, at right, after getting her blood pressure taken by heath tech Trudy Powell-McGee, of Stratford, at a free health screening in an eighteen-foot mobile unit outside of Community Health Services on Albany Ave. in Hartford on Tuesday. About fifty residents had their cholesterol levels, blood pressure and body mass index (BMI) checked. They received the screening results immediately. Credit: Patrick Raycraft | Hartford Courant

Marcus Wright was 27 years old, the healthiest he had ever been while training for a marathon, when he had a heart attack.

According to the Centers for Disease Control and Prevention , coronary artery disease is caused by deposits of cholesterol and other substances building up in the arteries supplying blood to the heart, which may partially or totally stop blood flow.

Wright said he came to the Wexner Medical Center at Ohio State and was seen by Dr. Ernest Mazzaferri Jr., an interventional cardiologist.

Sara Koenig, an assistant professor of physiology and cell biology at Ohio State, said typically after a heart attack, doctors will clean out the arteries if they are very clogged and prescribe medication to prevent future clogs, but in Wright’s case, the medication didn’t do that.

Koenig said Wright’s brother and mother were both diagnosed with coronary artery disease soon after him.

“At this point, we see a pattern of inheritance,” Koenig said. “That told us that we should go ahead and do genetic screening and genetic testing to figure out what was causing it.”

Koenig said the DNA test was able to reveal Wright has genes connected with heart disease and prevents high-density lipoprotein — the mechanism that carries cholesterol to the liver to then be removed from the body, according to the C DC — from working properly.

Koenig said the typical treatment for coronary artery disease is statin therapy — medications that reduce cholesterol by blocking the substance needed to make it, according to the Cleveland Clinic — but would be ineffective for Wright others with abnormally functioning high-density lipoprotein.

“We think that if we can promote the evacuation of cholesterol through high-density lipoprotein, and we can find a way to target that process, then we will have another therapy or another medication for these individuals that might not be responding to statins as well as their physicians may want them to,” Koenig said.

Koenig said after the researchers found the Wright family’s disease was not from traditional high-cholesterol causes, they began screening compounds to create a drug and help the condition.

“We screened those to see if we could promote this process of cholesterol clearing and we have identified a couple candidates,” Koenig said.

Koenig said the researchers identified a class of drugs to help improve cholesterol levels. She said the study is ongoing, and they are working to develop a new drug that will help those with high cholesterol.

Wright said he was thankful to learn it’s unlikely the disease will be passed onto his children and hopes his work with Ohio State helps other people with the same condition.