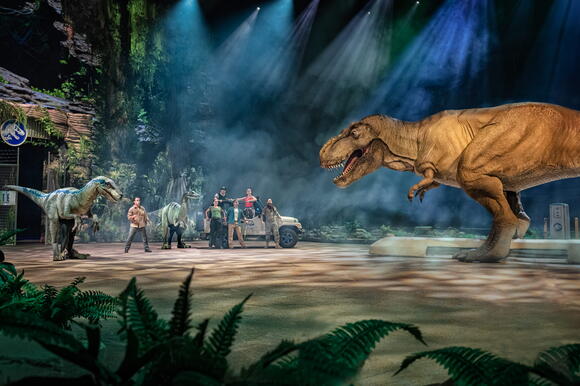 With lifelike dinosaurs like velociraptors and 40-foot Tyrannosaurus rex, “Jurassic World Live Tour” will premiere this week at the Schottenstein Center and mark the beginning of a countrywide tour.

Six shows are scheduled at the Schottenstein Center, starting Thursday at 7 p.m. with two more on Friday at 11 a.m. and 7 p.m. The tour features some of the most iconic dinosaurs from “Jurassic World” — including Blue the Velociraptor, the Stegosaurus, Triceratops and the T. rex, according to their website . The live tour in Columbus will conclude on Sunday with three shows at 11 a.m., 3 p.m. and 7 p.m. before traveling to Cleveland and Cincinnati.

Dave Redelberger, director of interactive marketing for the Schottenstein Center, said the show is the closest thing to dinosaurs walking on Earth that audiences will get to see.

“It is a theatrical performance, but it is cinematic in scope,” Redelberger said. “It is like seeing the movies come to life in front of your eyes.”

Redelberger said that the live show’s narrative is a continuation from where the story ends in the “Jurassic World” films.

The show is family-oriented, but audiences of all ages can enjoy it, Redelberger said.

Jahleel Christian, a performer in the live tour, said the event stands out from the films because  audiences get to experience what they love on screen as realistically as possible.

“Instead of being right there on your screen, it’s right there in your face,” Christian said.

Christian said rather than making audiences think about what life in the movies is like, the live tour immerses viewers inside that reality.

“From what we have all seen on the screen, to now take that from screen to being there in person and seeing this terrific storyline that’s actually its own storyline but is also canon, so being able to know where this storyline takes place, I think people are really going to enjoy it,” Christian said.

Christian, who plays one of the raptors on the show, said dinosaurs are made from light steel and foam wrapped in latex skins with a lifelike texture. Furthermore, cameras allow performers to see through the dinosaurs and interact with performers, as well as move around their eyes.

Christian said performing in the show has brought out a character in him he didn’t know he had.

“I remember way back when a professor of mine had told me that you learn something new everyday, and being a part of this cast, I have learned so many new things about myself,” Christian said.

Redelberg said one of the Schottenstein Center’s main goals is to provide a variety of entertainment to the community.

“Whether it’s Eric Clapton, or Kendrick Lamar or ‘Jurassic World Live,’ everything we do is a little bit different,” Redelberg said. “It’s unlike anything else that we’re doing throughout this year when you got a 40-foot T.rex roaming through the building.”

Redelberger said the first “Jurassic World Live Tour” was launched in 2019, and the Schottenstein Center was the place of kickoff then as well.

“We were the very first place anywhere on the planet the show was seen,” Redelberger said. “We are excited to relaunch it to a new generation of kids who maybe didn’t get a chance to see it or even families who would like to return.”

The tickets for the event are available on the Schottenstein Center’s website , ranging from $15 to $90.