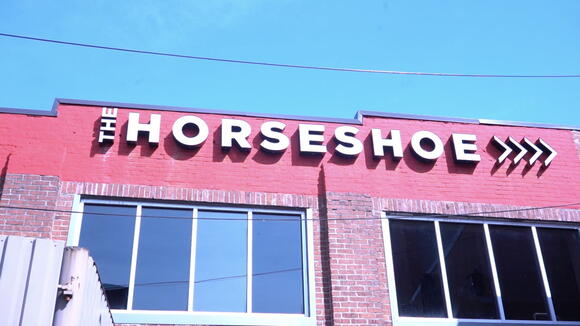 The Horseshoe Marquee can be seen from Lane Avenue north of campus. Credit: Courtesy of Sheron Colbert

The Horseshoe, located at 2159 N. High St., opened its doors in early September and is like no other on High Street. John Massimiani, an owner of The Horseshoe, said he decided to open a new-style bar with a country theme after the restaurant he previously owned, The Chop Shop, struggled to make a profit after the pandemic.

“If you go in there, it’s really realistic. There’s a lot of barn wood. There’s old tin, there’s hardwood floors, you know, for all the dancing,” Massimiani said. “We’re just in the process, we’re still you know, basically decorating still. There’s all new TVs in there.”

Massimiani said Jeff James, a line dance instructor, coordinates the bar’s dancing and will provide lessons on Wednesday nights for those who are at least 18 years old and lack experience.

“So, if you wanna come in there and learn how to line dance, you come in at 8 p.m.,” Massimiani said. “From eight to nine, he does lessons, and then the rest of the night they line dance. So, it’s open to everybody.”

Wednesday nights are the only night when people under 21 are allowed in the bar, Massimiani said.

Massimiani plans to bring local and national country music acts to The Horseshoe to expand the bar’s audience beyond Ohio State students. This may help out surrounding bars, like The Little Bar, which Massimiani also owns.

“We’re trying to bring people to that area, not just on game days,” Massimiani said. “So, we’re trying to do local bands that have a following, and then once a month, we wanna try to bring a bigger act to bring some people in from not just on campus.”

Zack Jarvis, general manager of The Horseshoe, said although the bar is country themed, it has something to offer for everyone.

“A unique aspect of The Horseshoe is that I think everyone can find what they’re looking for in a bar there,” Jarvis said. “There are booths and tables if you want to sit down and have a conversation with friends, a dance floor to dance and listen to live country music and multiple massive TVs all around the bar for everyone’s sports and rodeo entertainment.”

Jarvis said The Horseshoe has three bars in the space that all serve liquor, beer and drinks. The Horseshoe currently serves appetizers and may partner with food trucks for special events, Massimiani said.

“Pretzel bites, mozzarella sticks, jalapeno peppers, hot dogs, hot dogs with chili, you know, anything like that,” Massimiani said. “And also if we have any type of party, we can also use food trucks.”

Massimiani said customer appreciation is something that he plans to carry over from The Little Bar.

“I mean, we really take care of our customers. You know, like at The Little Bar we’ve been there 16 years,” Massimiana said. “If [I] ever wear a shirt that says Little Bar, and I’m in Florida, or I’m anywhere in the country, somebody runs into me that says, ‘I’ve been there on game day.’ So, it’s a big attraction, but we also take care of our customers.”

Jarvis said The Horseshoe opens Wednesday through Saturday at 6 p.m. and last call is at 2 a.m., but hours vary for game days.

Jarvis said The Horseshoe has a Facebook, Twitter and Instagram where people can keep up with daily specials, happy hour times, theme nights and live music acts.