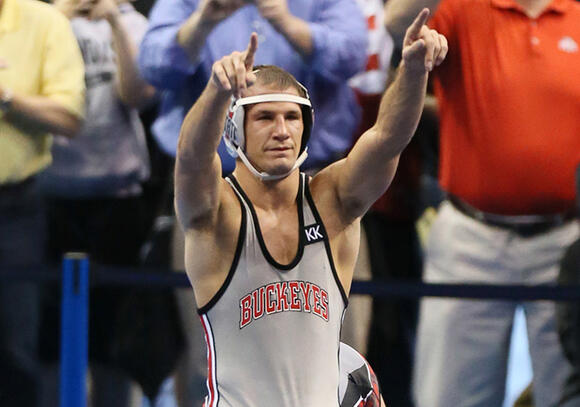 Ohio State’s Logan Stieber reacts after winning his fourth consecutive NCAA title by beating Edinboro’s Mitchell Port in the 141-pound championship match during the NCAA Division I Wrestling Championships on March 21, 2015, at the Scottrade Center in St. Louis. Credit: Courtesy of TNS

Becoming enshrined in the hall of fame wasn’t something Logan Stieber set out to do in his wrestling career.

Former 141-pound wrestler Logan Stieber was inducted into the Ohio State Athletics Hall of Fame Sept. 10. Stieber posted a 119-3 career record as a Buckeye, capping it off with a 29-0 senior season in 2015 among four NCAA championships.

Stieber, who now serves as the assistant coach, was one of 15 Buckeyes to be inducted in the 2022 class. Stieber said he is grateful that his dominance on the mat is being recognized.

“It’s a great honor, I feel really happy to be here,” Stieber said. “It wasn’t really a goal of mine when I came to Ohio State, to be in the hall of fame. It was something that was the hopeful product of success on the mat.”

Success came early, but not all at once for Stieber, he said. When pressure and expectations began to build early in his career, Stieber said he turned to his family to hold him accountable and take it slow.

“I had great people around me that helped me keep it in the moment,” Stieber said.

Among those people were his parents, Tina and Jeff Stieber.

For the Stiebers, the magnitude of their son’s success was never thought about during his career, Tina Stieber said. She said this allowed him to take things day-by-day and keep his focus on winning one match at a time.

“We were always just so busy getting ready for something else,” Tina Stieber said. “Even the four-time champion thing. We didn’t think like that.”

Logan Stieber was part of Ohio State’s first national championship team in 2015. Growing up in Monroeville, Ohio, the celebration of his success as a Buckeye adds a hometown element.

“I was born a Buckeye. I always loved Ohio State,” Logan Stieber said. “Ohio State was always going to be it. It’s really cool because when it’s your home state, people cheer a little louder for you.”

While Logan Stieber has given Buckeye fans plenty to cheer about, he is still leaving his mark on the wrestling program.

Logan Stieber joined head coach Tom Ryan’s staff as an assistant in 2021. The three-time team captain said he believes his leadership on and off the mat can translate to helping guide young players as a coach.

“I think they can learn a lot from my mistakes,” Logan Stieber said. “Having success and being a team leader definitely helps when you’re coaching.”

Ryan said he believes the success Logan Stieber had on the mat directly relates to the impact he has on the new crop of Buckeye wrestlers.

“He’s been through a lot of the things these guys are going through. He’s achieved every wrestler’s dream,” Ryan said. “He brings a tremendous sense of confidence. He just relates to people really well. He can take something that’s relatively complex and make it simple for people to digest.”

Few athletes have made as much of an impact on their school and program as Logan Stieber. From the coaching staff and beyond, his legacy does not go unrecognized.