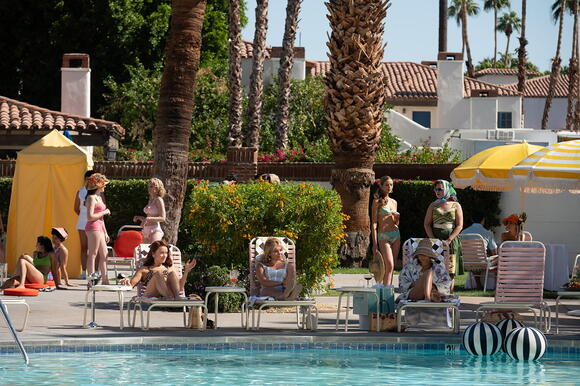 In the thick of the alleged drama and commotion surrounding the production and ensemble cast of “Don’t Worry Darling,” a movie was made.

Released Friday, “Don’t Worry Darling” proves that despite a star-studded cast, an enjoyable soundtrack and uncanny marketing through months of supposed production turmoil — good writing surpasses all — so despite plenty of lively sequences with jarring moments, the movie falls in the middle of the road.

“Don’t Worry Darling” never fails to remind audiences it’s doing something original, but rarely in a nuanced or subtle way. Simply put, the focus was in all the wrong places. Each time there was an opportunity to establish plot or develop characters, the movie spent twice as much attempting to impress the audience with scenes that stall the pacing. Though a fun trip to the theater, the rewatchability of “Don’t Worry Darling” remains low.

That’s not to say everything was bad. With moviegoers and masses of Harry Styles’ fans alike making their way to the theater, the movie scraped its way to the top of the weekend box office charts, raking in upwards of $19 million.

It starts as the audience meets the protagonist couple, Jack (Styles) and Alice (Florence Pugh), who appear to be happy, with nothing but love, affection and a lot of scenes with very little dialogue — for a short while. The ’50s tropes are on full display in the movie, with the neighborhood husbands of Victory, a suburban paradise town shaded by palm trees, toiling away at work at a strange facility in the desert called the Victory Project, the details of which others are not in the know. All the while, the wives stay home to cook extravagant meals, clean until their homes are worryingly sterile and most importantly, stay safe by never leaving the neighborhood, per their husbands’ requests.

There are overarching themes that one may expect to find in a ’50s movie adaptation, but none more notable than the relationship and power dynamic between couples. The concept of women being forced into the passenger seat of their own lives is heavily on display, and it’s up to Pugh’s character to change that.

Where “Don’t Worry Darling” shines is in its performance from Pugh, who continues to perfectly execute the role of a woman trapped in a toxic relationship. Chris Pine is seasoned as ever and captivates audiences through his eclectic portrayal of Frank, founder of the Victory Project and Jack’s boss. As far as Styles is concerned, he likely didn’t give the worst performance of all time, but it is not up to par with his counterpart.

During a press tour, Styles infamously spoke on what he enjoyed about the process of making the movie, and said “It feels like a real, like, you know, ‘go to the theater’ film movie.”

So the question remains, does it?

It does. “Don’t Worry Darling,” despite being a bit too on the nose at times, is worth a trip to the theater solely for the fun wardrobes, classic cars and commitment to originality, because if nothing else, movies like this are few and far between in today’s age.