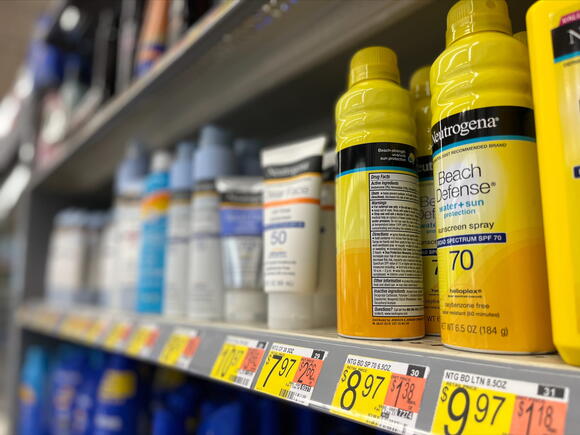 Purchasing sunscreen and paying attention to ingredients is vital in order to protect the skin. Credit: Pearl Carey | Lantern Reporter

A photo of a 92-year-old woman’s neck gained over 240 thousand likes and almost 13 thousand retweets on Twitter in early September — stressing the importance of developing a consistent skin routine at a young age.

The photo shows the difference between the woman’s youthful skin after decades of protection and her neck, which looks older and more damaged by the sun. It serves as a reminder to protect the skin against the sun even in the darker months, Dr. Susan Massick, dermatologist at the Wexner Medical Center at Ohio State, said.

“I saw the photo, which speaks to the power of self-protection on the face,” Massick said. “But, the parts that weren’t protected had that wrinkling and premature aging.”

With the weather cooling for the fall and winter, many may fall into the habit of neglecting their sunscreen application simply because there’s less sunlight. Wexner Medical Center dermatologist Dr. Catherine Chung said this is a common misconception of how sun exposure works.

“I try to remind people when I see them that, you know, when you have a little extra SPF moisturizer, make sure to get your ears and the back and front of your neck as these are very common places to get skin cancer,” Chung said.

Not only can individuals increase their chance of skin cancer by not tending to all parts of the body for skin care, but these inattentive actions can lead to premature aging, Chung said. This most commonly starts around the eye area where fine lines begin to form, she said.

“The freckling areas that get a lot of sun, such as the chest and back, are also at risk for aging,” Chung said. “Lines on the forehead and face are also signs of the aging process.”

Massick said even though summer creates an increased risk for sun exposure, ultraviolet A and B rays exist year round. According to the Skin Cancer Foundation , damage from UVA and UVB radiation can lead to premature aging and some forms of skin cancer, like melanoma.

Although it can be difficult to know where to start as a young person creating a skin care routine, Massick said the most vital part is to just build up the habit of applying sunscreen.

“Whether you’re tanning or freckling, or worst case scenario, you’re having sunburns, these are all indicative of actual damage to your skin,” Massick said, “So, you want to make sure that you’re being careful from the get-go.”