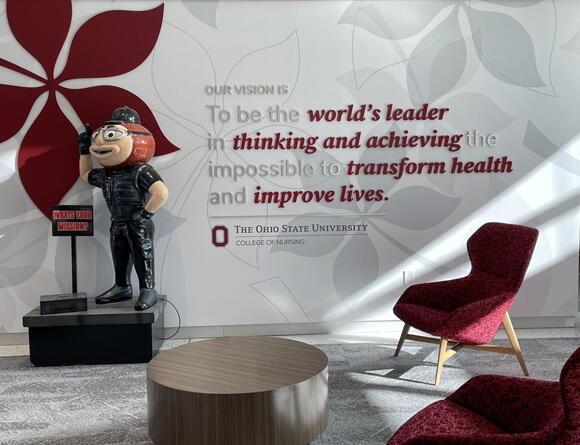 Molly McNett, a clinical professor in the College of Nursing, and Thomas Lawson, a lead advanced practice provider for the Neurocritical Care Unit at the Wexner Medical Center, were the two Ohio State researchers involved in an international study to determine the frequency of coma. Credit: Katherine Simon | Lantern Reporter

For the first time, researchers are investigating  how often people suffer from comas in the U.S. and Europe by surveying individuals online.

Ohio State researchers were involved in an international study of 2,000 people to determine the frequency of comas. Molly McNett, a clinical professor in the College of Nursing, and Thomas Lawson, a lead advanced practice provider for the Neurocritical Care Unit at the Wexner Medical Center at Ohio State, were two of 18 researchers from the U.S. and Europe who helped work on the study.

“The aim of the study was to get some international estimates of how common coma occurs,” McNett said.

According to the Mayo Clinic , a coma is a prolonged state of unconsciousness that can be caused by a variety of problems, including a traumatic brain injury, stroke or an underlying illness. Because those in comas can’t express themselves, doctors often rely on loved ones to provide information on potential causes and treatment options.

The study reported that five most common of the 714 causes are stroke, medically induced coma, COVID-19, traumatic brain injury and cardiac arrest.

McNett said the study used Prolific , a crowdsourcing platform, to survey people in the U.K. and U.S. because it wasn’t available in other countries.

McNett said there is no hospital billing code on how often comas occur because it is not a specific diagnosis type, so it is difficult for clinicians to get funds for research to develop treatments and for those caring for coma patients.

“Oftentimes, we’ll get good data on how often those things happen based on how often they’re billed for as part of the hospital stay, but because there’s not a separate billing code for coma, we really can’t use that mechanism to identify how often does coma actually occur,” McNett said.

McNett said the survey was launched in October 2021. Lawson said 977 people from the U.S. and 994 from the U.K. participated.

Lawson said the survey asked if the participant or a close family member had experienced a coma in the last year.

Lawson said he and McNett were contributing authors for the study as a part of the Neurocritical Care Society’s Curing Coma Campaign , which sponsored the study. Once understanding how often comas occur, it can impact how the patient is treated at the time.

“The Curing Coma Campaign is the professional society’s landmark ‘What can we do over the next five to 10 years to really address and solve a big problem?’” Lawson said.

Lawson said this research is important because it contributes to the science that will lead to the cure of comas.

“In some ways, all that we can do now is provide supportive care and let time pass and hope that the patient will improve on their own,” Lawson said. “Ideally, we would like to have something that’s more active intervention with a curative focus.”

The full study was published in the scientific journal Brain Communications , according to the release.