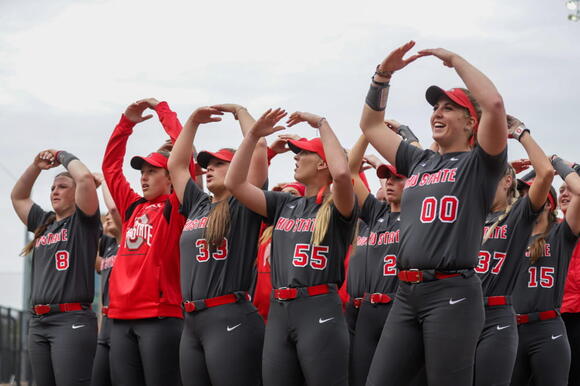 The Ohio State softball team started off its autumn season with a defensive battle during an intrasquad scrimmage at Buckeye Field.

“The pitchers did a nice job. They threw everyone out there and showed what they could bring,” Schoenly said. “Kennedy Kay, Julia Miller and Lexi Paulsen all get out there and kind of have their moments.”

Sophomore outfielder Melina Wilkison opened the scoring in the top of the fifth inning with a home run to deep left field off junior right-handed pitcher Emily Ruck of Team Gray, bringing the score to 1-0 Scarlet.

The Gray team wouldn’t respond lightly to a Scarlet team score. With the bases loaded in the bottom of the fifth inning, senior outfielder Tegan Cortelletti — who recorded the first hit of the game in the first inning — secured a hit that drove two runners home, bringing the score of the game to 2-1 Team Gray.

“For the team this year, I’m expecting a lot of power on the offense to take a little bit of pressure off of the pitchers,” Cortelletti said. “I know they can shut the other team down but to just have those extra runs for them is always nice.”

The final inning began with junior right-handed pitcher Allison Smith, pitching for both the Scarlet and Gray teams. Smith walked two batters in the top of the inning, allowing the prospect of a Scarlet comeback, but the Gray team stopped that.

The Scarlet team secured its first hit in the top of the second inning when senior first baseman Taylor Pack rattled off a single to right field, followed by another single by junior catcher Hannah Bryan. The rally fell short as senior second baseman Mariah Rodriguez of the Gray team hit into the first double play of the game to end the second inning.

An inning later, Team Scarlet rattled off three consecutive hits to load the bases with no outs. However, the Gray team secured another double play and Kay pitched a strikeout, keeping the game scoreless.

Paulsen, a freshman right-handed pitcher for the Scarlet team, walked her first two batters in the top of the fourth but escaped the inning without letting any runs on the board by striking out the next three batters.

In the top of the sixth, Ruck walked junior outfielder Lindsey Potter of the Scarlet team, and Pack bunted Potter over to second base. However, the Scarlet team was unable to dig into the Gray team’s lead.

Smith replaced Paulsen as Team Scarlet’s pitcher in the bottom of the sixth and did not let up a run, keeping the score of the game at 2-1 Gray.

Ruck said the Buckeyes are playing “hard ball” and that they have “great” team chemistry.

“We all get along very well outside of softball,” Ruck said. “So we bring that to softball, makes the game fun, competitive, energetic, so I think that helps a lot.”