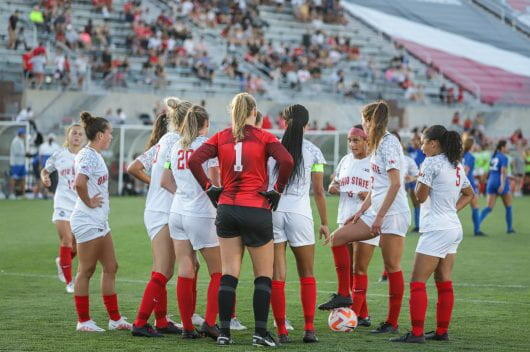 Ohio State (6-2-2, 1-1-1 Big Ten) scored its first goal in 14 days, just over four minutes into the game when sophomore defender Sydney Jones fired a pass from the top of the right side of the box and found Dudukovich for a tap-in to log the score.

Dudukovich said she and Jones have a great familiarity with each other, and the goal was something they’ve worked on in practice.

“We’ve played with each other for so long,” Dudukovich said. “This week in practice, we’ve really been working on our runs in the box and just being there.”

Iowa (3-5-3, 0-2-1 Big Ten) nearly opened the scoring just 90 seconds into the game as graduate midfielder Caroline Halonen had a point-blank shot in front of the goal but chipped the ball wide.

The Buckeyes nearly doubled their lead in the 13th minute when senior forward Kayla Fischer finished off a cross from junior midfielder Peyton McNamara but was denied by Iowa redshirt senior goalkeeper Monica Wilhelm.

Just over three minutes later, Ohio State threatened Iowa again as Fischer sent the ball from left to right across the box to senior forward Emma Sears, who found the back of the net, but the goal was disallowed as Sears was ruled offside.

Iowa had a disallowed goal of its own in the 23rd minute.

The Buckeyes took a 1-0 lead into the halftime break along with a 2-0 edge in shots on goal and a 9-4 advantage in shots overall.

Iowa threatened multiple times within the first seven minutes of the second half, but both crosses sent into the box were handled by Ohio State’s freshman goalkeeper Molly Pritchard.

The Hawkeyes nearly struck again in the 60th minute as sophomore forward Elle Otto had a run at goal, but senior defender Talani Barnett disrupted the play before Otto could get a shot away.

Barnett made another key defensive play nearly five minutes later, clearing a potential game-tying goal out of danger with a header.

The Buckeyes doubled their lead in the 67th minute as junior midfielder Kine Flotre found the bottom-left corner of the net from the top of the box after her initial free-kick attempt was blocked by the Iowa defense. Flotre’s goal was her first of the season.

Sears nearly extended Ohio State’s lead in the 70th minute with a shot from the left side of the box that was stopped by Wilhelm.

Iowa had one final opportunity to score in the 90th minute, but Halonen’s header off a corner kick was stopped by Pritchard.

Ohio State picked up its sixth win of the season and its first in Big Ten play. Head coach Lori Walker-Hock said she was pleased the team’s offensive effort.

“The runs in the box today were really good and strong,” Walker-Hock said. “It was a lot of movement, and it pulled their defense into uncomfortable places, and that’s what we’re trying to do.”

Ohio State held its alumni day hosting several former players and coaches from the 30-year history of the program. At halftime, there was a moment of silence to honor former Buckeye captain Amy Graeff Van Culin, who passed away in May after a battle with lymphoma.

Graduate defender Olivia Sensky left the game in the 15th minute with an apparent right knee injury. Freshman defender Brooke Otto replaced Sensky, and Walker-Hock said she didn’t have an update on Sensky.

The Buckeyes continue their Big Ten schedule when they travel to Bloomington, Indiana, on Thursday to take on the Hoosiers at 7 p.m.