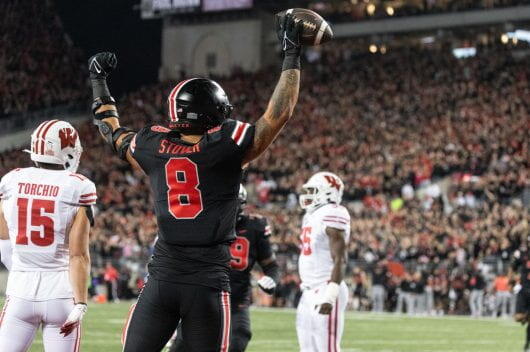 Wisconsin’s defense — which allowed the 12th-fewest yards per game in the Football Bowl Subdivision at 246 -– gave up 539 as three different Buckeyes scored two touchdowns. Among them was fourth-year tight end Cade Stover, who hauled in his first two career touchdowns and showed why Ohio State’s receiving room is considered one of the best in the country.

“He’s a tough player,” head coach Ryan Day said. “I’m proud of what Cade’s becoming for this offense. He deserves everything he’s getting, he’s earning it all. We’re all looking for those versatile players who can do multiple things, and he showed he can do that.”

The Mansfield, Ohio, native followed up his standout performance against Toledo by catching two touchdown passes in the first quarter. Although Ohio State was without third-year wideout Jaxon Smith-Njigba due to a leg injury, Stover’s performance again showed who’s Stroud’s weapons are.

Stroud echoed Day’s comments about Stover’s versatility, calling him a “Swiss Army knife” and saying how the chemistry he’s built with Stover is paying off in games.

“He can really do anything, so it’s just amazing to see his work pay off,” Stroud said. “He’s one of the first people that took me under his wing when I got to school. He’s a better person than he is a football player, so I’m really proud of him.”

The former defensive end and linebacker began the 2022 season as a tight end and is quickly proving valuable to Kevin Wilson’s offense.

Although many would look at Ohio State’s recent run of dominant wins as enough proof of the offense’s explosiveness, Stover believes “it’s another step in the right direction.”

“That’s a prideful, tough program and that’s what they’re known for,” Stover said. “For us to go out there and really enforce our wills on those guys is exciting. But we’re just stepping in the right direction every single week and every single day.”

Although Stover is emerging as a scoring threat, nobody on his team is surprised about his production. Stroud said he believes Stover will “continue to be great,” while Day said he’s exactly the type of player that every team wants.

Day further went on to say the Lexington High School product is the type of player “the NFL is looking for.”

“He’s a weapon for us in the pass game,” Day said. “He’s also getting after people in the run game and does a good job in protection. He can split out, come back into the backfield or line up as a tight end.”

Ohio State senior guard Tanner Holden (0) is mobbed by his teammates after nailing a buzzer beater three to give No. 25 Ohio State (7-2) the 67-66 win over Rutgers (4-3) in Columbus on Thursday. Credit: Zachary Rilley | Photo Editor.