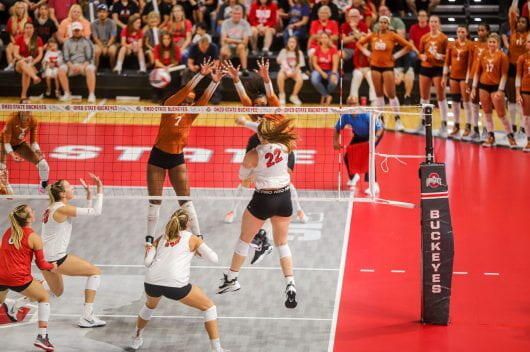 The final non-conference weekend for the No. 5 Ohio State women’s volleyball team took place in Pittsburgh facing Tennessee and No. 12 Pitt in another bout of hard-fought volleyball.

Ohio State’s offense was working, with a match-hitting percentage of .398 in a sweep against Tennessee.

Junior outside hitter Emily Londot got the Buckeyes on the board first with her first of 11 match kills. The set tied 14 times and changed leads six times, but Ohio State outlasted Tennessee 25-23.

The second set was a lot of back-and-forth action with 11 ties and seven lead changes. Ohio State took control of the set and the game with a 4-1 run to give the Buckeyes a 19-16 lead before winning the set 25-21.

Londot began set three with a first ball kill, and the Buckeyes would lead wire to wire. The Volunteersgot within four points at 18-14 after a 4-0 run but coming out of an Ohio State timeout the Buckeyes closed the door, winning 25-15.

Ohio State outscored Tennessee 55-44 in total points. The Volunteers hit just .152 in the match and .042 in the final set.

Senior outside hitters Jenaisya Moore and Gabby Gonzales combined for 23 of Ohio States’ 55 match points. Londot chipped in 12.5 points of her own and passed 800-career kills.

Ohio State’s win streak ended at four games by way of a sweep at the hands of Pitt.

The opening set began with a quick Pitt lead and tied six times before an Ohio State service error led to three-straight Panther points, making the score 15-12. That margin would be too much for the Buckeyes to overcome, and the set ended in favor of the Panthers 25-23.

The first set in the 23rd all-time meeting between the two schools came down to how well the Panthers hit the ball. Pitt out-hit the Buckeyes .316 to .219 in the set.

The Buckeye defense allowed 17 kills in each set heading into the third but could only muster 12 kills in the first and just nine in the second.

The third, and ultimately final, set had a total of 11 ties and came right down to the wire. A Londot kill was overturned leading to a match point, and once the last ball dropped Ohio State lost the match 25-23.

Ohio State’s offense struggled with just a .154 hitting percentage for the match.

Londot was the lone Buckeye to have more than six kills, finishing with a match-high 16. She continued her season-long streak of at least 10 kills in every match.