Men’s Soccer: Dowling makes the most of final year as a Buckeye 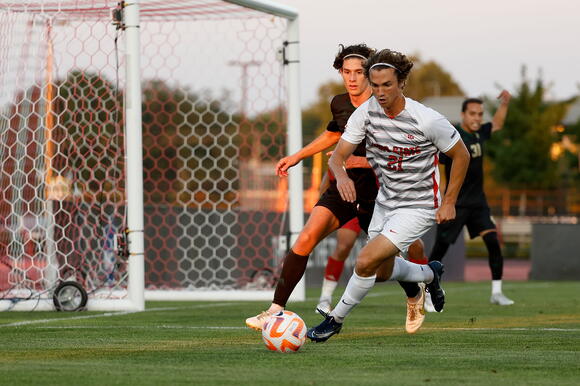 As a native of Dublin, Ohio, redshirt senior midfielder Chris Dowling grew up close to Ohio State, which familiarized him with the men’s soccer program and community.

Dowling said he finally donned an Ohio State uniform himself this season, getting onto the field in his second year with the program, which he said had been a long time coming.

“Honestly, just being around Columbus and the local clubs that they have here has been great, just in terms of meeting people and seeing people,” Dowling said. “The best part of it all is that I’ve had a lot of teammates who have played for OSU.”

Dowling played for Ohio Premier Soccer Club for five years and started on the national championship-winning team in 2018, his final year with the program. In addition, Dowling was named First-Team All-State as a senior at Dublin Jerome High School.

Freshman midfielder Ashton Bilow also played at Ohio Premier, and he said he had a connection to Dowling before joining the Buckeyes.

Head coach Brian Maisonneuve said he did not know Dowling in high school but got to know him when he was trying to walk on for the Buckeyes. Maisonneuve said Dowling tried out before the COVID-19 pandemic, so the team was unable to invite him back for the 2020 spring or autumn seasons.

Maisonneuve said the team needed to max out their roster space in 2021 in case players tested positive for COVID-19, so the Buckeyes invited Dowling back.

“We gave him a chance, and he’s taken advantage of it,” Maisonneuve said. “He just keeps grinding. A great person to have in the locker room, and he’s just got a great personality and a maturity about him.”

Dowling certainly has taken advantage of the situation. He has recorded one goal and one assist in five starts for the Buckeyes, including scoring the first goal of the season versus South Carolina Aug. 25.

“[The goal] feels amazing,” Dowling said after the South Carolina game. “Definitely a good goal and a long time coming. Hopefully we can get some more as the season goes on.”

“He’s probably one of my closest friends, and he’s a hell of a guy,” Wootton said. “To see him score a goal, I know he’s been waiting a long time. I know the team as well, we couldn’t have asked for anyone else to score that.”

Maisonneuve said he was happy to see Dowling score the goal and reflected on all he has been through. He called Dowling’s story “terrific” and heaped praise on his demeanor.

“We talk about perseverance, a guy with the right attitude, he’s been through ups and downs,” Maisonneuve said.

Dowling said Maisonneuve has taken the pressure off him as a senior, trying to do whatever he can to help the team.

“[Maisonneuve] has always told me in particular, it’s different from player to player, just to not think as much and just play,” Dowling said. “Having him and the rest of the coaching staff behind me and just kind of taking off the pressure is nice, especially as a senior with the young guys coming in.”

Dowling said he likes what he sees from the underclassmen. He noted the bench is “very deep,” and he’s been impressed with the freshmen who have stepped up so far this season.

Maisonneuve said Dowling has shown leadership to the freshmen since joining the team last season.

“His teammates have the utmost respect for him,” Maisonneuve said. “He has natural leadership in him, and he has a maturity in a way of bringing it out.”

Sophomore defender Nathan Demian said Dowling, although in only his first year seeing action, upholds high standards for the rest of the team.

“A lot of it is just leading by example,” Demian said. “Someone who talks a decent amount or is going to have those guys who don’t need to worry about and always lead by example, you don’t have to worry about them doing the right thing or their standards or where their headspace is.”

Although Dowling will graduate after this season, he said he wants to keep playing in recreational leagues. He accepted a job in Columbus and is excited to stick around to attend future matches as an alumni.

“I’ll be at the games next year and it’ll be fun to be local,” Dowling said. “So we have a fair — actually more than I thought we have — like a ton of alumni who were on the team who have moved to, like, Grandview and around and I see, like, honestly five alumni every game. It’s fun. It makes you feel like you’re still part of the team.”

Football: No. 3 Buckeyes embrace being ‘the bad guy’ in season’s first road game at Michigan State

The No. 3 Ohio State Buckeyes (5-0) will face their first road test as they travel to East Lansing Saturday in a matchup against Michigan State (2-3). Credit: Zachary Rilley | Photo Editor.

‘Dahmer- Monster: The Jeffrey Dahmer Story’ captures how the infamous serial killer remained under the radar for over a decade

As some viewers pointed out on social media, Netflix used an “LGBTQ” tag to categorize its new true crime series, “Monster: The Jeffery Dahmer Story.” Credit: Olivier Douliery via TNS.

The Ohio State field hockey team will travel to Athens, Ohio, Sunday after its matchup with Central Michigan Friday in Columbus. Credit: Zachary Rilley | Photo Editor. Ohio State takes a break from its conference schedule this weekend with two matchups against teams from the Mid-American Conference.