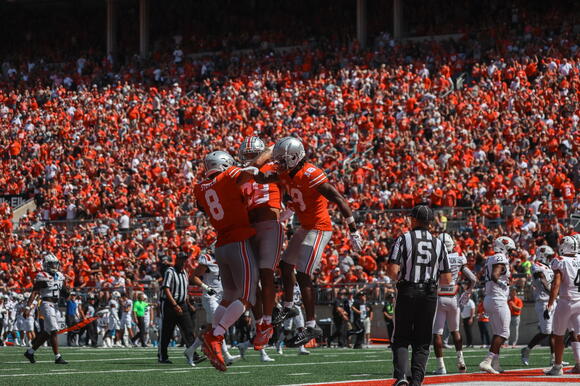 As the final seconds ticked down toward the end of the third quarter, second-year wide receiver Marvin Harrison Jr. leapt between two Arkansas State defenders near the corner of the end zone.

Harrison hauled in his third touchdown reception of the day on a 30-yard completion from third-year quarterback C.J. Stroud. On an explosive play like Harrison’s third score, he recalled advice from wide receivers coach Brian Hartline and said “it’s just making a play.”

“Coach Hart tells me to go up and get the ball a lot, use my size, so that’s what I try to do,” Harrison said. “Just go up and make a play.”

Harrison added catches of 45 and 42 yards, second-year wide receiver Emeka Egbuka hauled in 51- and 44-yard catches — and nearly a 78-yard punt return that was called back due to penalties in the first quarter — while fourth-year tight end Cade Stover brought in a 35-yard completion of his own.

Arkansas State forced the Buckeyes to four three-and-outs Saturday, but Ohio State head coach Ryan Day said he wants the offense to look for ways to “control the game.”

“I think that’s important is that we’re starting drives out, we get a couple easy completions, we get those couple first downs, then all of a sudden we start to roll,” Day said. “It’s been something that’s kind of happened to us the first couple of games, a couple three and outs. We got to do a better job with those, but Marvin was a big part of getting us going. He certainly had the big play capability.”

Stroud tossed 351 yards against the Red Wolves, topping his total in the season opener against then-No. 5 Notre Dame and doing so on eight fewer completions.

Even though Ohio State’s passing game showed strides compared to its performance against the Fighting Irish, Stroud said he believes there’s still room for improvement.

The Buckeyes also made four rushing plays of at least 10 yards Saturday, led by second-year running back TreVeyon Henderson running for 41 yards on the Buckeyes’ second offensive snap in the first quarter.

Henderson averaged 8.7 yards per carry and added two touchdowns. He said he thinks he’s continuing his approach when toting the football from last season, which stood as a record-breaking campaign for Henderson and any Ohio State running back.

“The expectations as a running back at Ohio State, you got to be physical. You got to run hard,” Henderson said. “You got to make people miss, and so I’m just trying to live up to the expectations.”

Ohio State amassed 538 yards of total offense Saturday, up from 395 it recorded in the season opener. The Buckeyes’ longest offensive play against Notre Dame went for 24 yards; in Saturday’s contest, they had 10 that exceeded that distance.

College football’s No. 1 offense last season came from the Buckeyes at more than 561 yards per game. Day said Ohio State adjusted from Week 1 to Week 2, but there’s a long way to go until the end of the year.

“We have to be able to throw the ball but then we have to win in four-minute drills and run the ball in short yardage and in the red zone,” Day said. “So constantly working towards those things so that we can get to where we need to be. The good news is we’ve already played a top-five opponent, so we’ve already proven ourselves in some areas, but the only way we’re going to accomplish our goals is if we keep building and growing and getting better in all these areas.”