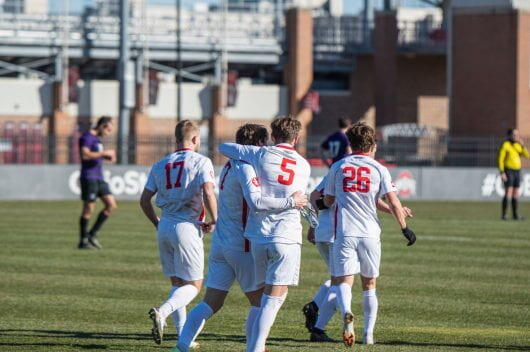 McLaughlin was named the Big Ten Defensive Player of the Week Tuesday after recording three — now four — consecutive shutouts. He said the award is more a reflection of the team’s defense and commended senior midfielder Brayden Durbin for stepping up this match in place of junior midfielder and captain Laurence Wootton.

“We just take one game at a time,” McLaughlin said. “No game is bigger than the next, but this obviously feels great afterwards. Beating a top-12 team in the nation sounds really good.”

Head coach Brian Maisonneuve also said Durbin was the “man of the match,” playing excellent on both sides of the ball.

While both teams had several opportunities to score — each able to penetrate the opposition’s 18-yard box — neither could execute. Ohio State had four corner kicks to Butler’s none and nine fouls to Butler’s seven.

Sophomore defender Nathan Demian, did not return after an injury in the 10th minute.  Maisonneuve said he does not know Demian’s injury status but thinks he’ll be OK.

Both teams continued their high energy in the second half. Six yellow cards, including four from the Buckeyes, were handed out in the second period.

However, the momentum shifted in favor of Ohio State early in the half. After a slip from Butler fifth-year goalkeeper Gabriel Gjergji leading to a tap-in goal for freshman midfielder Marko Borkovic.

Borkovic said he gained confidence scoring in his debut against Cal Poly Aug. 28, and he has tried to adjust to the higher physical play in the U.S. one game at a time.

“I don’t think about the future,” Borkovic said. “Just try and make an impact on the game and have managed to do that so far.”

At the 70th minute, redshirt senior forward Devyn Etling netted a header off a corner kick from sophomore midfielder Anthony Samways, putting the Buckeyes up 2-0.

Etling said it was tough sitting on the sidelines due to injury over the first four games but knew when the opportunity for a corner presented itself, he would execute.

“It gives you a little hunger because you want to be out there,” Etling said. “I love corner kicks in there on the end of some of those balls. So when I saw one of those, the opportunity, I was just ready to go finish it.”

Maisonneuve said he was impressed with Butler’s ball movement in the first half but knew what to expect in the second half.

“Second half, we knew what it was going to look like, so I thought from the get go, we were better,” Maisonneuve said. “We want to press high, but their movements are so good that sometimes we just got to drop our block. It doesn’t mean we’re low pressure, but it just means our block’s a little bit deeper. So, you know, I thought we figured that out.”

“We talked about being aggressive,” Maisonneuve said. “The thing we’ve been focusing on is shots on goal. You know, last year, shots on goal percentage was very low. This year, it’s been much better. So that’s been helping out.”

Maisonneuve’s Buckeyes take on No. 9 Akron away Tuesday at 7 p.m. at FirstEnergy Stadium.