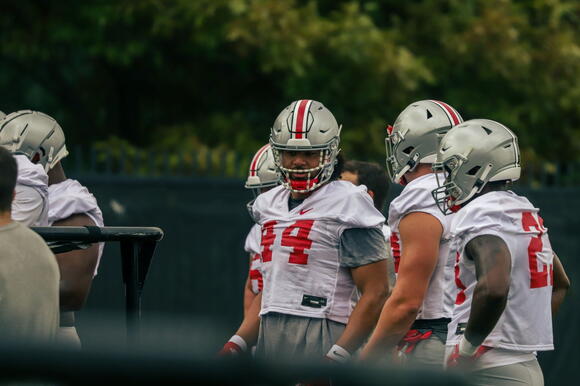 Ohio State’s defense shuffled linemen in and out often last season, and that game plan might be seen in Columbus again in 2022.

Defensive line coach Larry Johnson said if he’s “lucky,” the Buckeyes will use as many as 12 players. Third-year defensive tackle Ty Hamilton thinks as many as 14 are ready to go.

Regardless of what the final figure ends up being, No. 2 Ohio State’s front four will most likely be rotating between the sidelines and the field, paying dividends to the health and longevity of the unit.

“Normally, we’d play anywhere between 10 to 11, but, you know, we could get to 12,” Johnson said. “It depends how the game play and what we’re playing, what package we’re playing. All that stuff plays a role in what we’re doing.”

Last season’s 21-man defensive line room used the services of all but two players, with 15 recording at least one tackle.

The Buckeyes look to replace the departures with four four-star recruits from the class of 2022, according to 247Sports , in first-year defensive linemen Kenyatta Jackson, Omari Abor, Caden Curry and Hero Kanu, who has been nicknamed “Hero the Hulk” due to his 6-foot-4, 315-pound stature.

This season, the Buckeyes’ 18 linemen have a veteran presence led by fourth-year Zach Harrison , fifth-years Taron Vincent and Tyler Friday — with the latter voted a team captain for 2022 — and graduates Jerron Cage and Javontae Jean-Baptiste.

Second-year defensive tackle Tyleik Williams will build off his freshman campaign, in which he established himself as not only a run-stuffer on the interior, but showed an innate ability to get after the quarterback, recording five sacks — good for second best among Buckeye defenders last season.

The two both credited strength and conditioning coach Mickey Marotti for helping with their physical fitness in the offseason as Sawyer — who’s listed at 260 pounds — said he’s added muscle this offseason, and Tuimoloau said he’s lost about five pounds.

So, the Buckeyes have some options on who to plug into the defensive line at any given moment, and this will pay dividends when it comes to keeping players fresh.

The main disadvantage of having such a deep room, as was seen at times last year, is that there’s not as much of an opportunity to get into a rhythm. Harrison, however, doesn’t believe that will be the case this season.

“If you’re on the field, you got to go win your one-on-one matchup, whether you’ve had five plays in a row, this your first play of the drive or you’ve got 10 plays,” Harrison said. “Obviously you’d like to get into a rhythm, but you don’t always get that luxury if you want to stay fresh and play the whole season, all four quarters, every single game at the fastest.”

With all the talent the room has to offer, they still realize there is a lot to learn at the position despite contributing 37 sacks last season — third best in the Big Ten — establishing a culture of paying their knowledge forward to the next wave of Ohio State defensive linemen.

Tuimoloau said Harrison gave him advice when he first arrived in Columbus last year, and now, despite just being in his second year with the program, he wants to do the same.

“When we first came in he was just telling us like, ‘You know, let go. Just go out there and play,’ and that was his biggest advice for us, for us young guys,” Tuimoloau said. “Now, we’re giving it to Hero, Kenyatta, Caden, all them and more.”

No matter who is on the field come Sept. 3 against No. 5 Notre Dame, though, Johnson said he wants the defensive linemen to work together to maximize success.

“You look at the wolves, you know, when wolves travel alone, he’s got a chance to not be successful,” Johnson said. “When he travels in packs, that’s when he gets to be successful.”