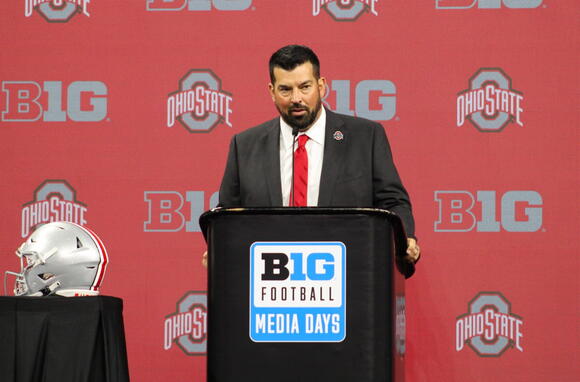 Despite missing the Big Ten Championship and College Football Playoff for the first time since 2018, the Buckeyes were picked behind Alabama, which holds the top spot after advancing to the CFP national championship game last season. Ohio State received five first-place votes, according to the preseason poll.

Chosen by random draw, a panel of 65 Football Bowl Subdivision head coaches who’ve indicated their interest conducts the USA TODAY Sports AFCA football coaches poll weekly, according to the preseason poll. A first-place vote is worth 25 points, second place is 24 and so on to 25th place.

Notre Dame, which will be Ohio State’s first opponent in the season-opener at Ohio Stadium Sept. 3, placed No. 5 in the preseason coaches poll.

Head coach Ryan Day said the Buckeyes will use fall camp to determine which players are the most “game ready” come the start of the season after the team began preseason practices Thursday.

“We try to create game situations to see how you’re going to respond,” Day said. “Every day in practice is an opportunity to prove yourself.”

Defending-champion Georgia ranked No. 3, and Clemson rounded out the top-four teams in the preseason coaches poll.

Among Big Ten competitors, Michigan is the second-highest ranked conference opponent, slotting in at No. 6. The Wolverines defeated the Buckeyes last season in Ann Arbor for the first time since 2011 and won the Big Ten title game.

Michigan State and Wisconsin were the remaining Big Ten teams inside the Top 25, slotting at No. 14 and 20, respectively.