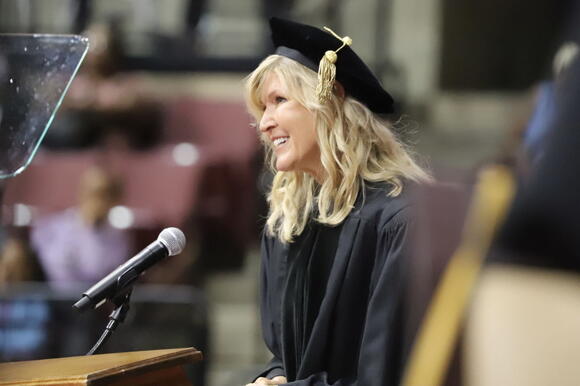 Grote Abbell, who graduated from Ohio State in 1988, said she is proud to still be affiliated with the university. She said challenges will persist in the future, and each graduate’s purpose is their power to overcoming them.

“Your class achieved all this despite enormous difficulties,” Grote Abbell said. “Nothing, not even a worldwide pandemic stopped you from achieving your goals. I am in awe of everything you have achieved to get here today.”

Grote Abbell spoke about her purpose to keep Donatos Pizza open was built on love after McDonald’s tried to sell and close the chain. She said she realized reopening its doors would bring back those who counted on them for food everyday.

“That’s when I learned not to fall in love with my plan, but my purpose,” Grote Abbell said. “The most valuable lesson was to walk away from fear and lead with love.”

Grote Abbell also emphasized to treat others how you want to be treated. She said no one could  know what others might be going through.

Grote Abbell opened her third point saying doing the right thing is not always the easy thing. She talked about how at the beginning of the pandemic, Donatos was approved for an $8 million loan, but turned it down when realizing other businesses needed it more.

University President Kristina M. Johnson spoke of the “rumbles” happening throughout the world with political polarization, war and climate change. She said graduates should take advantage of technology now at their disposal and show what the world should expect to see in the future.

“Model the future with every tool at your disposal, including your imagination,” Johnson said. “I call it following the breadcrumbs.”

The ceremony also held a moment of silence for the death of Mason Fisher, a second-year medical student, who died Saturday after participating in Pelotonia — a three-day cycling fundraiser for cancer research at The Ohio State Comprehensive Cancer Center.

Johnson presented Ruth D. Peterson, emerita professor of sociology and former director of Ohio State’s Criminal Justice Research Center , with a Distinguished Service Award for her commitment to serving her community and students.  She also awarded an honorary doctorate degree in business administration to Grote Abbell.

The Ohio State Alumni Association President and CEO Molly Ranz Calhoun welcomed the graduates as alumni. She said the graduates have the power to influence the future.

“You will change lives in ways not yet imagined, paying forward in service and raising your voice for justice,” Calhoun said. “You are Buckeyes for life.”