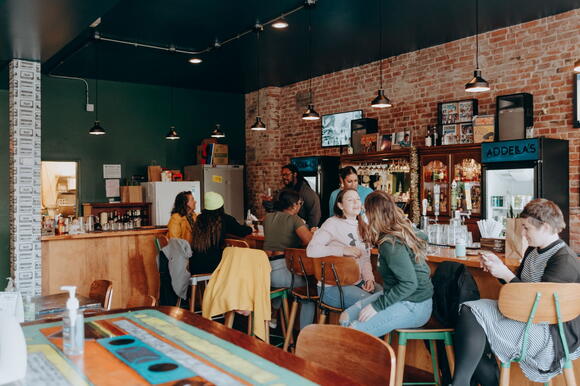 After working in the University District at a number of campus bars such as Barrel 44, Toos and Out-R-Inn, Karrio Ballard chose to open his own neighborhood bar and grille — Addella’s on Oak.

After meeting his wife Victoria Hink, the two bought and developed an empty facility at 1485 Oak St . that would later open as Addella’s on Oak in October 2020, combining their daughters’ names, Addy and Stella. With a versatile regular and plant-based menu, live entertainment and a newly-minted liquor license, Addella’s works to serve its community.

However, its start did not come without some challenges, mainly not having a liquor license due to the pandemic. Without the license, their full vision for Addella’s would not yet be complete.

“It wasn’t easy, and I never sugar coated it,” Ballard said. “We sold our house to make this happen. We had to do a lot of things that people would not be able to stomach to try and make this happen, but it was something I believed in.”

Without a liquor license, the only alcohol sold was beer and wine. Despite lacking a full bar, Addella’s was equipped with a largely plant-based menu alongside their normal menu, according to Ballard, whose family follows a plant-based diet.

“I feel like when you don’t have it, you’re cutting off a demographic, you know?” Ballard said. “So basically, what we wanted to do was take our regular menu and have a plant-based option. Essentially, when you’re looking at our menu, almost everything that’s on the regular menu is on the plant-based menu.”

The bar and grill serve a variety of food options from tacos, burgers, clubs and meatball subs – that all can be made plant-based, Ballard said. The restaurant proudly uses the slogan “Serving food you’ve had before like you’ve never had before.”

Patrick Kalista, Ohio State alum and general manager of Addella’s on Oak, said its plant-based options help increase business due to Columbus’s growing vegan population. He said Addella’s is one of the few restaurants listed as plant-based on Uber Eats and DoorDash in the area.

“There are not too many options around here,” Kalista said. “That’s what I hear from people all the time, and I would say sales are almost 50-50 some days. I do actually have people who are meat-eaters who now eat plant-based burgers because they say it’s better.”

Addella’s finally received its full liquor license one year after opening with help from the community.

“I was going door to door getting the signatures with Karrio, and we were doing all that with a lot of help from our regulars who just went out with sheets and got signatures and posted online to help,” Kalista said.

At the start of 2022, the restaurant began hosting live musicians, such as Harmonic Soul — an R&B and soul band — as well as showcasing local fine art pieces. Ballard said this was another way to increase community involvement.

“We have our regulars that come in, and now they will know the band we are hosting,” Kalista said. “Or other people who come in to see the band, but then they’re like, ‘Oh, you guys sell food. Oh, you have this.’ And then it’s just everyone helping each other.”

With Ballard having spent time in the University District bar industry, he believes Addella’s menu, art displays and music offers something different to students looking to venture into the off-campus neighborhood.

“If you ever want to experience something a little bit different, and in the places that you’re probably going to be in once you graduate, we’re kind of like that next step,” Ballard said.

From the challenge of opening in 2020 to becoming a popular neighborhood bar and grill, Kalista said he is happy for Ballard and the community that their vision came to fruition.

“Addella’s is special to me because we’re super invested in this neighborhood,”Kalista said. “Put everything into it. Put my whole life on the line. What’s next is, I don’t know. We’re really just getting to the point where like, I’m finally feeling a little grounded.”