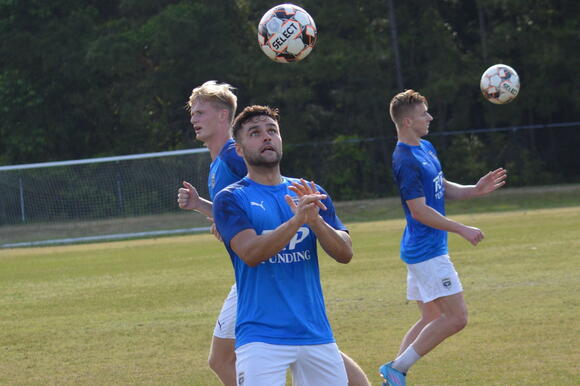 Reed Davis intends to transfer from Jacksonville University to the Ohio State University for the upcoming 2022-23 season. Credit: Louis Llerandi

An Ohio State newcomer has kept busy this summer, performing in big moments for the Jacksonville Armada of the National Premier Soccer League.

It’s normal for college athletes to fine tune skill sets in the off-season, and redshirt senior midfielder Reed Davis, who transferred from Jacksonville University, is doing just that.

The Buckeyes finished 6-9-1 and just 2-6 in Big Ten play last season, and will begin their new campaign against Ohio Dominican University Aug. 12, when Davis will likely make his debut.

The atmosphere and tradition of Ohio State athletics were things Davis said he couldn’t pass up when he decided to transfer.

“When I entered the portal, I wanted to maximize my opportunity with a great school,” Davis said. “The opportunity was there, and it was hard to turn down a program like Ohio State.”

A native of Fleming Island, Florida, Davis was a two-time Gatorade Florida Player of the Year and the first to win the award in consecutive seasons.

Buckeyes head coach Brian Maisonneuve said in a release Dec. 21, 2021, that he thinks Davis will make an immediate impact.

“He has a great frame, soft feet, and high soccer IQ,” Maisonneuve said. “He strikes an excellent ball and is outstanding around the goal. Reed’s attitude and leadership is exactly what we look for in a student athlete and he will be a great addition in the locker room as well. We are very fortunate to add Reed to our Buckeye soccer family.”

During his time with Jacksonville, Davis  was captain, helping the team advance to a conference championship and NCAA tournament appearance in 2020. In 2021, Davis received ASUN Preseason Player of the Year and ASUN All-Tournament First Team honors.

After graduation, Davis looked for a new opportunity and transferred to Ohio State in December.

“The best attribute I can give Reed is his competing nature,” Ruiz said. “He’s very passionate about his work ethic. He’s a leader that lets the work speak for itself.”

Davis suffered a groin injury that sidelined him for nearly two years, returning to the field for the 2021 campaign after making an impact and earning a unanimous All-Freshman selection in 2018.

Ruiz said the injury made Davis more appreciative of the sport, and he’s seen it drive him to the next level.

“Throughout his injury period and upon his return, he began to understand that his body needs self-care all the time,” Ruiz said. “He combined the wisdom with his abilities, and that’s why I think he’ll be great at Ohio State.”

Davis has been competing for the Jacksonville Armada of the National Premier Soccer League, a nonprofessional league allowing soccer players to continue competition and physical conditioning during the offseason,  this summer. In the Round of 16 in the NPSL playoffs July 15, Davis scored the game-winning goal in stoppage time.

“It’s hard to come back from a deficit, but Reed never stopped trying,” Krizanovic said. “He’s a great example to his teammates — always to keep the foot on the gas every minute.”

The Armada concluded their season with a loss to Tulsa Athletic July 23, but Davis cherished his time with the team and said he hopes to return next summer.

“I’m lucky to have to play with such a great group of guys,” Davis said. “Made the summer go by really quickly, how fun it was. If the opportunity presents itself, I’ll be in Jacksonville next summer competing again with the team.”

Davis will  meet with his Buckeye teammates in Columbus as the team prepares for the 2022 season.