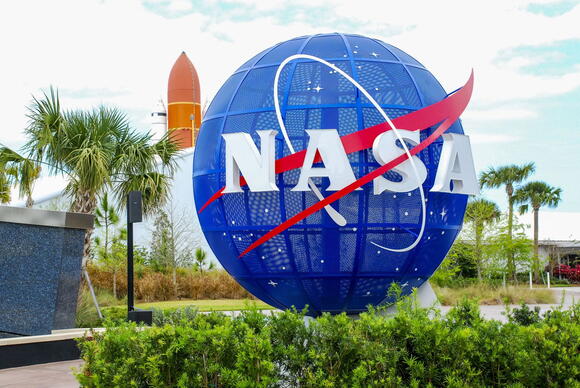 The NASA logo at the entrance to the Kennedy Space Center Visitor Center, Cape Canaveral, Florida. A space shuttle rocket booster is in the background. Credit: Dreamstime via TNS

Not many can say their career has literally been out of this world, but Ohio State alum Nancy J. Currie-Gregg is one of them.

With four space shuttle missions under her belt, the Troy, Ohio, native is one of only 50 U.S. women and the second-ever Buckeye to serve as a NASA astronaut.

After retiring from space flight and gaining 35 years of experience in NASA and the military, Currie-Gregg currently works as a professor of engineering practice, industrial & systems engineering and aerospace engineering at Texas A&M University and runs their Safe Systems Analysis and Functional Evaluation aerospace research lab.

Currie-Gregg, born in 1958, said the earliest memories she has are those of her dad taking her out to airfields to watch planes, which quickly caught her interest. She joined NASA in 1987 as a flight simulation engineer.

“I can recall wanting to fly probably before I could even walk and dreaming about flying,” Currie-Gregg said. “And I was very blessed because no one, no teacher ever said ‘little girls can’t do that.’”

“I compare it to like my moon landing, you know, Currie-Gregg said. “I’m never gonna have a moon landing, but that was way up there from a professional perspective to be a part of that and to have been in charge of all the robotic arm operations and to be the flight engineer on that flight.”

Currie-Gregg was also part of a crew tasked with servicing the Hubble Space Telescope , a telescope launched in 1990 to explore objects in space. She said her role in this mission, which has a great impact on younger STEM students, meant a lot to her.

“We landed and then almost immediately the science team for Hubble was sending us images from the camera system that we installed,” Currie-Gregg said.

Currie-Gregg said she was blessed that she was able to get such opportunities.

“Nancy was held, I say this primarily because I’ve heard it from so many people and so many astronauts, that Nancy was held in very high esteem in many areas, not the least of which was technical,” Sanzone said.

When it comes to Currie-Gregg’s role in assembling the first two pieces of the International Space Station, Sanzone said she was the best of the best.

“She was like, expert at it. You know, if you want somebody to do it right, get Nancy,” Sanzone said.

David Hamilton, the now-retired former chief engineer at the NASA Engineering and Safety Center, said Currie-Gregg has always been very professional and personable, and her achievements are not to be taken lightly.

“I just hold her in such high regard, you know, she’s just a very capable person,” Hamilton said. “Anybody that’s from Ohio State, you ought to be proud of alumni like that. I mean, just getting selected for the astronaut corps is a really big deal.”

Currie-Gregg said anyone hoping to follow a similar career path should not be deterred and to “follow your dreams.”

“I had people that were fairly close to me tell me I was chasing a pipe dream and you just can’t listen to that,” Currie-Gregg said. “Because if you never apply and you never try, then you’ll never achieve it.”