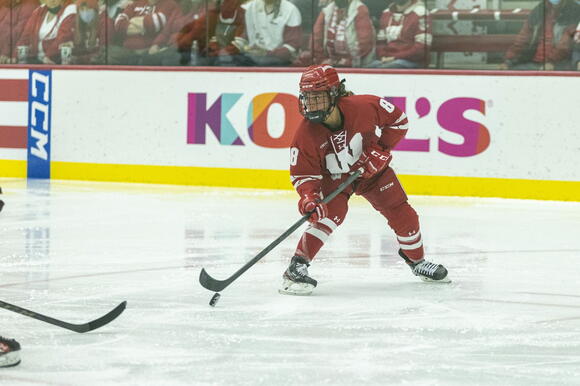 Makenna Webster, a former standout at Wisconsin, will transfer to Ohio State and plans to participate in both Field and Ice Hockey. Credit: Tom Lynn

Makenna Webster was already 7 years old by the time she started playing ice hockey, but her field hockey career began while she was in a physical education class.

“We were doing field hockey as one of our units, and I was doing well in it. And she told me that I should try out or go play for the club in St. Louis called Gateway, so the next year after I started ice hockey, I got into field hockey around in second grade,” Webster said. “And ever since then, I’ve been playing both field and ice hockey.”

She excelled, though, winning a national championship and earning the Frozen Four Most Outstanding Player in 2020. She represented the United States at the International Ice Hockey Federation U-18 Women’s World Championships and won gold twice from 2018-20.

Yet, Webster still pursued her passion for both field and ice hockey. Continuing her Gateway Field Hockey Club career, Webster played all the way through high school and more recently advanced with her team to the 2021 USA Field Hockey National Club Championship game in July 2021.

It was with Team USA where Webster became familiar with Ohio State field hockey head coach Jarred Martin, who has coached the United States U-17 National Team since 2015. Martin said he watched her compete in both sports on the ice and field.

“It’s one thing to do both — I think it’s another thing to have that much of success in both,” Martin said. “But I think that just goes to show who she is as a person, her athleticism, her competitiveness. Just her commitment. I mean, she just loves, loves to play.”

Webster parted from Wisconsin in April and entered the transfer portal. She recorded 66 points, 35 assists and 31 goals during her Badger career, including leading her team with 30 assists and finishing third with 53 points and 23 goals last season.

Webster said she enjoyed her experiences and career at Wisconsin but wanted to continue playing field hockey.

“My first two years of college, just playing ice hockey, but then I was really missing field hockey,” Webster said. “Playing that and helping out at Gateway camps during the summer, I just realized how much I missed it and decided to enter the portal.”

Ohio State women’s ice hockey head coach Nadine Muzerall and the Buckeyes captured the first national championship in program history March 20 . Once Muzerall found out Webster intended to transfer from Wisconsin, she got in communication.

Meanwhile, Martin said Gateway Field Hockey Associate Director Kate Graft — Webster’s club field hockey coach in St. Louis — reached out to him with the message that Webster had entered the transfer portal, so he picked up the phone, too.

Muzerall said because Webster only played ice hockey at Wisconsin, she was only in the transfer portal for that sport.

Muzerall said she supported the idea of Webster’s dual-sport prospects, hoping to achieve her aspirations of landing a key player in the Western Collegiate Hockey Assocation. She recollected on her own soccer career growing up, saying she “always regretted” not checking out her collegiate soccer opportunities before committing to ice hockey, so Muzerall is grateful to get the best of both worlds for her and Webster.

“With the resources we have here, with our strength and conditioning, and with our nutritionist and our sports psychologists and with our academic counselors, she’s going to be really supported,” Muzerall said. “That’s why I ended up supporting it in the end is because I trust my staff that they’ll balance that for her and keep an eye on that, you know, that she doesn’t get burnt out.”

For Webster, she’ll compete closer to family, she said. Her father is from the Cleveland and attended Kent State, and she has more relatives in Indiana. She’ll also have the chance to play both field and ice hockey at Ohio State, a program in which she’s already familiar.

“It was always tough games, like a great rivalry between Wisconsin-Ohio State. Ohio State is just a tough team to play,” Webster said. “They’re always working hard, and they’re always being physical and everything, and I just love the way how coach Muzerall coaches them.”

The Buckeyes field hockey team begins preseason exhibitions against Ohio Aug. 17, and the women’s ice hockey program starts its season at Minnesota State Sept. 30, so Webster will be challenged by the overlap of the two sports.

But Webster, Martin and Muzerall aren’t worried. The three plan to communicate with one another and haven’t set a firm schedule in place, but Webster is excited to have the opportunity to play the two sports she loves under one uniform.

“I think we’re just going to take it day-by-day. There’s just a great connection from all the staff members,” Webster said. “It’s obviously going to be tough, but at the end of the day, it’s going to be a great experience, and we’ll just see how it goes.”