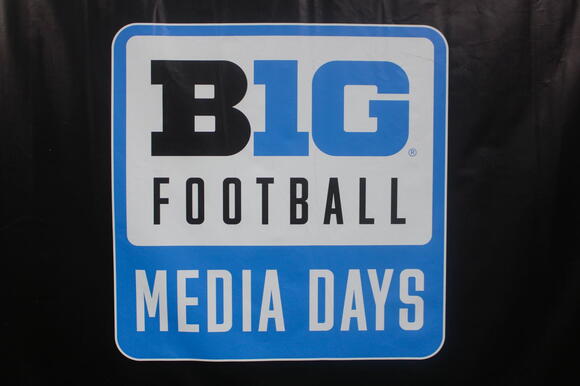 Despite having the No. 1 ranked offense in college football, 11 wins, a Rose Bowl victory and multiple first round draft picks, the Ohio State football program is not satisfied with its performance last season.

“We’re expected to win each and every year,” Day said. “Some places, going 11-2 and winning the Rose Bowl is a great year. At Ohio State, it’s not. Our goal is to win a national championship. The expectations haven’t changed.”

Although Ohio State lost key pieces to the NFL — including first round picks with wide receivers Garrett Wilson and Chris Olave —  Day said the team mentality and expectations haven’t changed.

The Buckeyes return a number of contributors from last season but are led this season by third-year quarterback C.J. Stroud and junior wide receiver Jaxon Smith-Njigba. Stroud, a 2021 Heisman Trophy finalist , said he feels he has a lot more to prove during the 2022 season.

Meanwhile, Smith-Njigba comes off a season where he led the team in receiving yards and put forth an iconic Rose Bowl performance catching 15 passes for 347 yards, both single-game school records .

However, he shares the same sentiment as his head coach and quarterback, wanting to showcase more of the team and his potential in the 2022 season.

“I have to stay level-headed,” Smith-Njigba said. “We fell short as a team last year, not making it to the playoffs and not making it to the national championship game. I feel like I haven’t really done anything or won anything. So this year, I’m looking for a change, and I know I have to work to get there.”

The Buckeyes made sweeping changes with its defense, starting with hiring former Oklahoma State defensive coordinator Jim Knowles to call plays. After last season where Ohio State ranked in the bottom half of the Big Ten in points per game and yards per game given up, Stroud mentioned the improvement the defense has made in such a short amount of time.

“You don’t want to go to the coach for everything all the time,” Hickman said. “To be able to go to someone that you’re playing with on the field with you, he knows what it’s like to be out there, and it’s huge.”

Day said he expects the defense to be on par with the offense from last season. After missing out on the College Football Playoff, Day knows the importance of revamping the defense in order to be back in the national championship game.

“It’s been exciting to watch,” Day said. “There is a certain aggressiveness about them. But in terms of expectations, we expect a top 10 defense. We will work with what we have and go from there, but I expect a top performance on both ends of the ball.”

Student involvement fair postponed to Aug. 28 due to inclement weather

Board of Trustees approves new free speech and textbook policies

From left, Daniel Kaluuya, Keke Palmer and Brandon Perea in “Nope.” Credit: Universal Pictures via TNS. Jordan Peele, former star of Comedy Central’s “Key and Peele” turned horror director of “Get Out” and “Us,” had high standards to live up to with his third feature film. Receiving his biggest budget to date of $68 million, Peele was obliged to attract audiences with nothing less than a shocking and original spectacle to exceed expectations.

Whether you are looking to rock out, appreciate some art or pig out at a festival, The Lantern has you covered. Here you will find a heavily researched — but still tragically incomplete — list of happenings around Columbus this week. Click the title of any event for more information.

Ohio State defensive line coach Larry Johnson speaks with the media at the Woody Hayes Athletic Center Tuesday. Credit: Casey Smith | Lantern TV Sports Producer. Entering his 27th year as a college coach, including his ninth at Ohio State, Larry Johnson is the one returner among the Buckeyes defensive staff.

Students for Justice in Palestine at Ohio State aim to bring attention to the Israeli-Palestinian conflict through a rally and candlelight vigil. Credit: Jessica Langer | Editor In Chief.

Ohio State announced on Wednesday they would lead a new engineering research center focusing on advanced manufacturing. Credit: Madison Kinner | Assistant Campus Editor. Ohio State will lead a new research center focusing on advanced manufacturing, which could be one of largest research investments in the last decade for the university, according to a Wednesday news release .

Crimes committed in the campus area and surrounding neighborhoods. Credit Madison Kinner | Assistant Campus Editor. As Ohio State reports fewer campus crimes than in past summers, the university will keep its current safety programs, surveillance and joint patrols with University Police and Columbus Division of Police officers for the fall semester.

There will be no changes from the university’s summer COVID-19 guidelines for the fall semester as of now, university spokesperson Chris Booker said in an email. Credit: Mackenzie Shanklin | Lantern File Photo.

Football: ‘Learning to slow it down’: Hayden adjusts to pace, complexity of college transition

Men’s Basketball: Royal building legacy while ‘still being at home’ as 2023 commit

Signing to share: Senior lecturer reflects on her role as ASL interpreter for DeWine’s COVID-19 briefings

Marla Berkowitz was hired as an American Sign Language interpreter for Ohio Gov. Mike DeWine’s coronavirus briefings. Berkowitz, a senior lecturer in the ASL program at Ohio State, is the only ASL Certified Deaf Interpreter (CDI) in the state of Ohio. Credit: Marla Berkowitz.