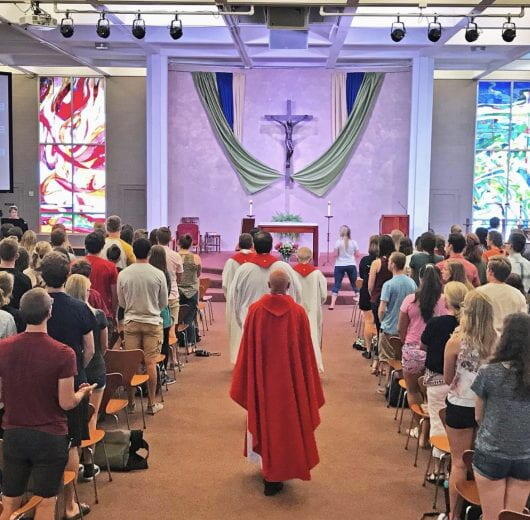 The Paulist Fathers, who have served at the Newman Center for 66 years, will be leaving at the end of July due to the new leadership in the Diocese of Columbus. Photo courtesy of Madisyn Callahan.

Mary Ward, who has been a congregant of The Saint Thomas More Newman Center at Ohio State for 59 years, loved the connections she was able to make with the students who attended the church.

However, with the recent leadership changes within the Newman Center for a “student-focused vision,” Ward and other church members claim they are being overlooked. Ward said the new Diocese’s vision will alienate and prevent non-students from participating within the church.

“In this era of ‘cancel-culture,’ he has canceled the resident community, and that includes the younger ones prior to entering college,” Ward said. “There will be no programs for them as there has been in the past.”

“Just because there are an older population of non-students does not mean it isn’t student-focused,” Callahan said. “In fact, the community members are there to support the students.”

Even with a more student-focused vision, Julia Dreiling, a third-year data analytics major who attends the Newman Center, said enacting these changes, specifically the removal of the Paulist Fathers — a New York-based independent order of Priests who have run the Newman Center for 66 years — prevents the students from being involved.

“[The Paulist Fathers] are just wonderful people in every sense of the word, and for the bishop  to toss them out like this without conversations with the community and the Paulists themselves shows an extreme disregard for other people’s personhood,” Dreiling said.

Ward said the Newman Center has always been focused on the students, but having community members involved makes sure that the programs and volunteer work continues even as the students graduate and move from Columbus. With this change, many members will go to different churches, she said.

“I don’t know if there will still be anybody who is going from the resident community, but the majority certainly won’t,” Ward said.

The Newman Center could not be reached for comment by the time of publication.

Sandy Murray, who has attended the Newman Center for 59 years, said she does not agree with the removal of the Paulist Fathers. The Paulist Fathers will host their final Mass on July 31 after not being able to compromise with Fernandes’s new contract.

Callahan said that the Paulist Fathers were a huge part of what made the Newman Center so welcoming to the students.

“The important part of the Paulists, I think, is that they take the time to get to know every one of the students or community members that walks through their door,” Callahan said. “I think allowing the Paulist Fathers to be there for those who gravitate towards their careisms is important, while we could have brought in help from the Diocese if they really found need. They didn’t have to take over in the way they did.”

“I’ve been a cradle Catholic, a faithful Catholic, all of my life; none of this seems to be what Pope Francis is saying,” Murray said. “He wants a listening church.”

In response to those in favor of the change, Callahan said it’s due to their lack of understanding of what the Newman Center does.

“A lot of their belief has been that the Paulist Fathers do not teach the teachings of the Catholic faith because they are open to certain communities,” Callahan said. “This is not the case; they have never once taught against the Catholic faith.”

Murray said she is worried as Fernandes seems to be bringing in people who follow his conservative views.

“One of the reasons they gave for this change was wanting to bring in other groups that were not currently represented at the Newman Center,” Murray said. “I am familiar with some of them. They are extremely conservative and present a narrow view of what Catholicism is all about.”

Callahan said while she does not agree with these changes, she still hopes the leadership transition will end well and the Newman Center will continue to serve the Ohio State community.

“I really do want to see this work out. I’ll never wish failure on these priests,” Callahan said. “I know they have good intentions, but I just can’t see this going the way they expect.”