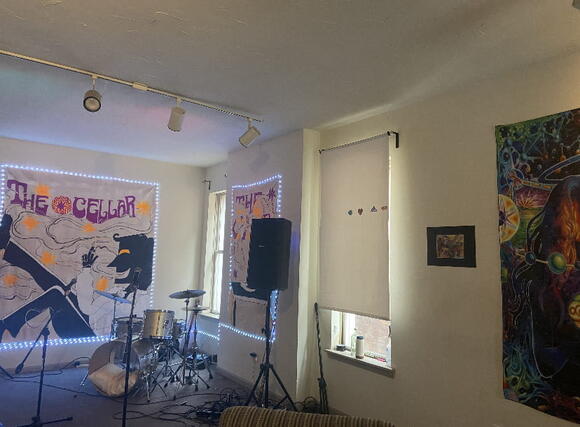 The Cellar, a local music venue in a Columbus home, sits empty, ready for its next performance. Credit: Juliana Hilton | The Lantern

As COVID-19 restrictions lifted and shows began returning in person, the revamping of house show culture made the first concert Teddy Woyak and his housemates held at “The Cellar,” a house-turned concert venue, an unforgettable experience.

Woyak, the public facing logistics consultant for The Cellar, said the addition of his musically-inclined housemate Auden Stevenson is what drove their focus towards the house show culture in Columbus — specifically around Ohio State. This culture is what sparked inspiration for him and his roommates to transform their house into a concert venue, he said.

“We’ve been able to get some really amazing acts that you wouldn’t really be able to see anywhere else,” Woyak said. “And a house show that isn’t in somebody’s basement, or grunged out apartment, or like in the middle of the woods or something. I think one of the best things that we do here is we kind of provide a very open and honest and accepting environment for you to come and see these really great acts.”

Located in the University District at 1842 N. Fourth Street, The Cellar has hosted bands like Spillway, Rat Motel and As Well since opening in 2021.

Woyak said most bands were created during the COVID-19 pandemic as friends quarantined together, but there has also been a recent growth in bands with immense talent.

Woyak said he is excited to host these bands with such talent in his house.

“I think it would be such a shame to have all this talent not be shown off to people,” Woyak said. “I think it’d be so shameful for people, you know, really want to create all these beautiful pieces of work and nobody see it, you know?”

Max Tuber, creative director for The Cellar, said he finds bands to perform at The Cellar through word of mouth and by reaching out via social media, such as Instagram .

“Instagram is a great tool but word of mouth is also great, and that’s what helps with being active in the local scene and stuff,” Tuber said.

Tuber said in addition to connecting with the Ohio State community, he and his housemates also make sure to connect with other university music scenes throughout Ohio.

Tuber said the ability to host live music and bring people together is a rewarding experience for him.

“I love getting to not only see them but to kind of operate behind the scenes, getting things taken care of for them and kind of the production side of things,” Tuber said.

Tuber said as The Cellar approaches a new season, he hopes for future shows to bring in other creatives, not just musicians.

“I’d like to be putting on different kinds of events here,” Tuber said. “Fashion people, art people, get in touch with us. We want to incorporate all the young creatives in the kind of OSU Columbus bubble here.”

Woyak said The Cellar has been hosting open jam sessions for the past year and would love to see more of the Ohio State community come out and collaborate with other musicians.

“If you are a musician at OSU and you want to come play with other musicians, come to The Summit every Tuesday. It’s open, it’s free, and we just come out and make new bands,” Woyak said.