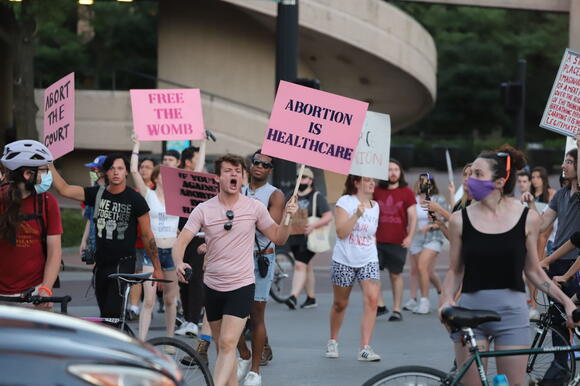 Student organizations are both happy and upset with the overturning of the precedent set by Roe v. Wade , the 1973 Supreme Court decision that allowed women to have an abortion without excessive government restriction. The right to an abortion is now in the hands of state governments, according to the Court’s majority opinion on the case of Dobbs v. Jackson Women’s Health Organization .

The same day of the decision, a federal court judge removed the three-year injunction on passed Senate Bill 23 , also called the heartbeat bill, which prevents abortions after six weeks, according to Ohio law.

Jamie Scherdin, the Ohio regional coordinator for Students for Life of America who works with Ohio State’s chapter, said the group is happy with the Supreme Court’s decision and believes it gives more freedom to states. She said the new laws on abortion are a step in the right direction, but there is still work to be done.

“We celebrate and applaud the Court for fixing what was nearly a 50-year wrongdoing, finally returning the issue to ‘we the people’ from a few judges with an agenda,” Scherdin said. “We as an organization will not stop until we have protection at conception in all 50 states, and abortion is not only illegal but unthinkable.”

The official 6-3 vote to overturn Roe v. Wade came after a draft of the decision by Justice Samuel A. Alito was leaked in May . Alito said in the opinion that the Constitution does not protect abortion, and “no such right is implicitly protected by any constitutional provision.”

Jamie Reed, a fourth-year in environmental policy and president of Student Advocates for Sexual Health Awareness, said the group stands firmly against the Court’s ruling. They said they worry it may lead to more overturned decisions on other issues that cite the 14th Amendment.

“Overturning Roe v. Wade also opens the door for anything under the 14th Amendment to be overturned as well, including the right to contraceptives, gay marriage, and same-sex sexual activity/relationships,” Reed said.

According to Forbes , Justice Clarence Thomas said the Supreme Court should reconsider other precedents for same-sex marriage, contraceptives and more when looking at future cases after the ruling.

The Ohio Democratic Party , the Party for Socialism and Liberation and Sunrise Columbus have held large protests at the Statehouse since Friday as well as university groups, such as the College of Social Work, posted their support for reproductive health and choice.

Aaron Reilman, a fourth-year in computer and information science and president of Students for a Democratic Society at Ohio State, said he believes both parties in Ohio are to blame for laws he believes lessen women’s rights.

“Democratic complacency and Republican malice have harmed the incredibly diverse people of Ohio, and will continue to harm as Republicans strengthen their chokehold on the legislating bodies in Ohio,” Reilman said.

Reilman said he believes this decision will hurt the people of Ohio, and like Reed, believes this will lead to further restrictions on other issues.

Reed said SASHA will continue to advocate for an individual’s ability to have an abortion, as well as the inclusion of LGBTQ people on campus — especially during Sex Week — an annual event organized by SASHA, dedicated to sexual education and awareness.

“We will continue to provide as much information as we can, both during Sex Week and throughout the year, to support our community through these changes,” Reed said.

Correction: The story has been updated to clarify that Reed spoke of an “individual’s” ability to have an abortion.