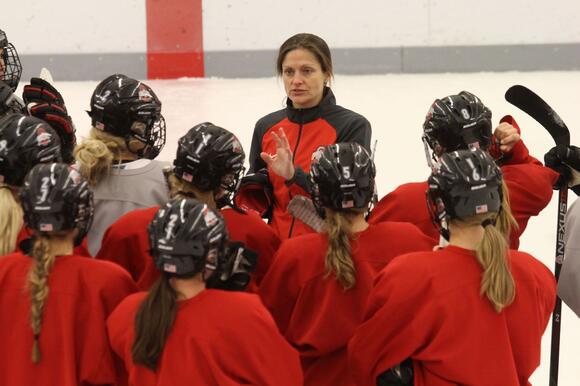 “The reality is women compete just like men and the experiences are the same,” Smith said. “It’s important for us at Ohio State to make sure that we provide the same quality educational experience for women as we do for men, and we’re passionate about it. I’m blessed to work with great coaches and they all share my passion that we got to do it the right way.”

Growing up with hockey as her passion, Muzerall said she had “no other option” but to play on boys hockey teams where men were often the head coach. She said she had to make adjustments, such as using a girls bathroom to change clothes, in order to find and take advantage of playing opportunities growing up.

The lengths Muzerall went just to play the sport she loved didn’t end there, either.

“I just found this out not too long ago, my mom used to have to go in front of a board of all men and convince them that I was good enough to play on the boys team, and she would have to do that pretty regularly throughout the season any time we played against good competition,” Muzerall said. “It was one of those things that my mom had to get out there and sell her kid being a young girl that she was good enough to play with the boys.”

Smith and Oman discussed the array of programs offered at Ohio State to promote and support opportunities for women both on and off the the playing field, including the Women’s Athletic Excellence Fund that works “to support and enhance the experience and development of student-athletes participating in a women’s varsity sport.”

“One of the greatest things that I think that OSU does is provide opportunities and to make sure that we showcase all those resources because they’re endless,” Muzerall said. “It’s not just doing it to check the boxes; they do it because they truly care.”

Oman said there’s still progress to be made. She said she’s proud of  the percentage of female head coaches among the women’s sports programs at Ohio State, and she wants it to continue growing.

“Our percentage is, probably, when you look at on our women’s teams, the number of women coaches we have is really impressive,” Oman said. “They have to see you to be you, and if they don’t see that, I just think we’re taking away leadership opportunities for young women because they’re not going to aspire to what they could aspire to for that.”

Taylor said she experienced the impact of having female coaches throughout her childhood, and it continues with her current volleyball head coach Jen Flynn Oldenburg.

“It’s definitely a blessing, she has done so much for our culture,” Taylor said. “Knowing that she has impacted all of our lives so much off the court, on the court, getting us out of our comfort zone but also demanding us to be at the highest level, so she’s done so much work for us, and I’m excited to see how she continues to keep developing this program for the future.”

The group reflected on the strides Ohio State and athletics as a whole have made since the implementation of Title IX. Oman said Title IX provided a roadmap to consider different areas the university has invested in, such as financial aid and participation in athletic competition.

Smith said he considers all of the sports at Ohio State, men’s and women’s, regardless of gender. During a time of reflecting on the last 50 years, he said he wants to bring opportunities for all student-athletes and continue keeping Ohio State at the forefront of change both competitively and inclusively.

“I just know this, that every single sport we have, we need to make sure they have the resources in order for those student-athletes to have the same experience across the board,” Smith said. “At the end of the day, they all are the same to me, and so what we have to do is have that belief cascade throughout our family and in the department and fight hard to make sure our women’s student athletes have the same experiences as our mens student-athletes.”