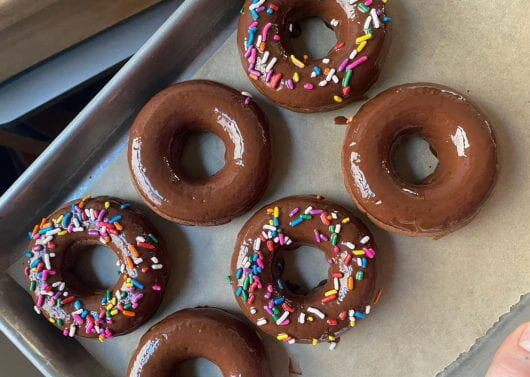 Bad Temper Bakeshop opened its doors this spring to serve the Columbus community a variety of pastries, cakes, coffee, lunch and breakfast options at an affordable price.

“When we moved in March, we’ve been able to kind of get back to our roots of having a wide spread of pastries,” Lambert said. “Originally, we did markets with pastries, and now in the shop, we are also doing some breakfast and lunch service to build more into the savory flavors.”

The name originates from a play on words, Lambert said, referencing the process of tempering chocolate in baking, which is a method of heating and cooling to make cocoa butter. She said she wanted the name to relate to baking while having a personal message.

Lambert said she came up with the idea for Bad Temper with her friend Megyn Huber, and the two have been doing pop-up markets since 2019. After the pandemic struck and put pop-ups on hold, Lambert said she began practicing custom cake making, which she now continues within their shop.

“That was actually a really cool way for me to find my own voice in that medium, and because decorating cake and baking are almost like two totally separate realms of skill set,” Lambert said.

Eli Lambert said stating with a pop-up shop helped them create a business at a cheaper cost.

“Her starting Bad Temper with the smaller pop-ups helped us kind of be able to stomach the startup cost because doing a full-scale restaurant is just outrageously expensive,” Eli Lambert said. “I think she started it with the goal in mind to have it be something that’s approachable and a way for us to do it at our own pace.”

The two said they often incorporate fresh ingredients, which enables them to cater to vegetarians or those with dietary restrictions while finding inspiration for flavors, Eli Lambert said.

Abigail Lambert said gardening many of her ingredients has helped her value having accessible food and keeping prices low in her business.

“I think that being able to combine growing our own food and feeding people is a way to start the conversation about how to make food accessible,” Abigail Lambert said. “I think that’s why at the shop, we try to have price points that could get someone a hot fresh meal for something that’s reasonable even when everything is expensive these days.”

Not only does Abigail Lambert want the food to be accessible at Bad Temper Bakeshop, but she said she hopes to provide a comfortable environment for someone who wants to eat or work in the shop.

“We feel so grateful to have a space that’s affordable and accessible and to be in such a great community of people,” Abigail Lambert said. “I am living my dream right now. Like if my 14-year-old self knew that I was doing this, like, I could cry, you know? This is a chance for me to learn and to share food with people and to just not take myself so seriously all the time.”