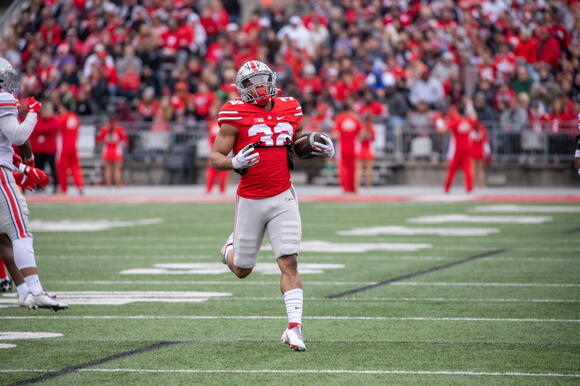 The duo represent two of the important contributors on Ohio State’s offense, which led the NCAA with an average of 561.5 yards per game in 2021. Smith-Njigba set a number of program receiving records, stamping his sophomore campaign with 347 receiving yards across 15 catches in the Rose Bowl while Henderson broke the freshman touchdown record with 19.

On the second team, senior offensive lineman Dawand Jones and graduate kicker Noah Ruggles earned nods from the Walter Camp Football Foundation. Both assumed roles as starters in 2021, as Jones moved into the starting right tackle position and Ruggles joined the program as a transfer from North Carolina, making all 74 extra-point attempts and going 20-for-21 on field goal tries.

No Buckeye defensive players were named to the Walter Camp preseason All-America teams. Ohio State will replace several starters on defense entering the 2022 season, and former defensive tackle Haskell Garrett is among them. He was the only defensive recipient of an All-American nod after last season , earning second team honors from the Associated Press.

Sophomore quarterback C.J. Stroud is another notable name missing from the preseason list. After being named a Heisman Trophy finalist, Stroud earned Second Team All-American honors from the AP last season on his way to 4,435 passing yards, 44 touchdowns and a 71.9 completion percentage.