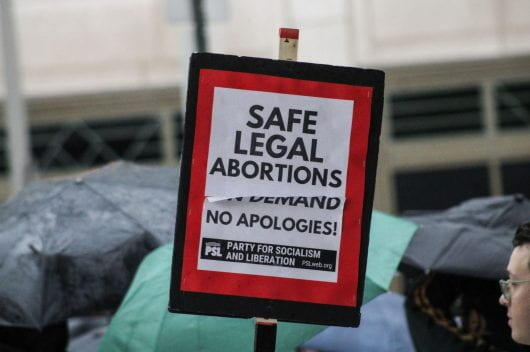 The United States Supreme Court struck down Americans’ right to an abortion Friday, which may impact Ohio’s current abortion access.

The precedent set by Roe v. Wade , the landmark 1973 Supreme Court decision that protects a woman’s liberty to have an abortion without excessive government restriction, has been overturned, with the right to an abortion now in the hands of state governments.

At the time of publication, Ohio permits abortions until 20 weeks of pregnancy, but with a conservative majority, Ohio legislators are likely to push for the criminalization of all abortions.

The Court ruled on the case of Dobbs v. Jackson Women’s Health Organization, concerning a Mississippi law that bans abortion after 15 weeks of pregnancy. The ruling with a 6-3 majority comes after Associate Justice Samuel Alito argued the majority opinion on the case, Dobbs v. Jackson Women’s Health Organization , December 1, 2021, stating the regulation of abortion “is returned to the people and their elected representatives.”

“The Constitution makes no reference to abortion, and no such right is implicitly protected by any constitutional provision,” Alito said in the opinion.

The three dissenting Justices — Stephen Breyer, Sonia Sotomayor and Elena Kagan — highlighted Roe v. Wade’s impact on American women’s autonomy and their ability to control their future. The three Justices said the Court “discards the balance” set in Roe v. Wade, disregarding abortion rights before the point at which a fetus can survive outside the womb.

“With sorrow — for this Court, but more, for the many millions of American women who have today lost a fundamental constitutional protection — we dissent,” the dissent said .

In Ohio, Gov. Mike Dewine and legislators have a history of trying to enact anti-abortion legislation .

Ohio Senate President Matt Huffman (R-Lima ) said in a statement Friday that he is celebrating the ruling and following the guidance of the Supreme Court.

“I look forward to reviewing the specific details in the opinion, so that as we move forward, any legislation we pass in the Ohio Senate follows the guidance of the court, protecting life, and upholding the Constitution,” Huffman said.

Ohio Right to Life President Michael Gonidakis celebrated the ruling in a statement Friday and said the organization will push for the total ban of abortion under Ohio law.

“Ohio Right to Life encourages our pro-life legislative majorities and Governor DeWine to be ambitious and end abortion once and for all in our great state,” Gonidakis said. “We are dedicated and prepared to pass our Human Life Protection Act and send it to Governor DeWine’s desk as soon as possible.”

Protesters took to the streets in May after Politico leaked the Supreme Court opinion draft, revealing that the court aimed to overturn Roe v. Wade. The protests in Columbus, organized by Planned Parenthood Advocates of Ohio and pro-choice speakers, voiced their concern for potential changes in abortion rights and the protection of Roe v. Wade, which they said impacts the rights and safety of Ohio women.

Iris E. Harvey, President and CEO of Planned Parenthood of Greater Ohio, said in a statement Friday that she was “devastated” by the overturning of a 50-year-old precedent. She said Ohio Planned Parenthood aims to stay open to provide patient care, including abortions.

“If you are angry and upset, we are there with you, but it is important to remember that as of today abortion is legal in Ohio,” she said. “If conservative politicians make abortion inaccessible here in Ohio, we will make sure our patients can access the care they need out of state, wherever that may be.”