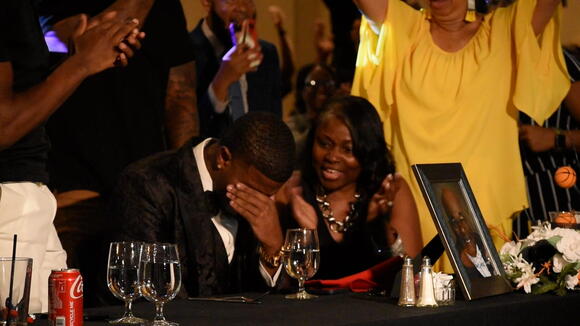 With childhood memories and framed photos filling the room, E.J. Liddell bowed his head and took in the emotion as he realized he was going to the NBA.

As the 2022 NBA draft entered the second round Thursday, Liddell’s anticipation vanished with the No. 41 overall and 11th pick in the second round when the New Orleans Pelicans selected the junior forward. His lifelong dream came true in a room full of over 100 friends and family members who erupted into cheers inside St. Clair Country Club in his hometown in Belleville, Illinois.

“It’s awesome. I’ve been dreaming about this for a long time,” Liddell said. “I’m going to keep getting better. That’s my thing. I get better. I improve. I work.”

Mocked and projected to get picked in the first round , the predictions didn’t quite come to fruition.

Liddell said it was tough waiting until the second round to finally hear his name called in the NBA draft, which is something he’ll keep in the back of his mind.

“It’s the word potential nowadays, I guess, but I mean, I know I did everything I could in my power,” Liddell said. “I went back to school. I worked. I got better. Continuing to pass up on me, that’s fine. I understand.”

The former Buckeye captain spent the last three seasons as an integral part of Ohio State, earning back-to-back selections to the First Team All-Big Ten. Liddell is one of 33 Buckeyes all-time to record over 1,000 points and 500 rebounds in his career.

Holtmann said Liddell will have “a lot of work ahead of him,” but thinks he’ll have a successful career in the NBA.

“He’s earned this moment,” Holtmann said. “It’s a really, really special night for him. I’m really, really proud of him and all the work he’s put in.”

His mother, Michelle Liddell, embraced him with hugs while his immediate family and guests cheered around them. Michelle Liddell said her husband, Eric Liddell, had to leave and not see the selection in person for an undisclosed reason, but they cherished how “special” the atmosphere became and know E.J. Liddell takes pride in where he came from.

“Obviously, a great moment to hear his name called,” Michelle Liddell said. “Of course, he wanted it to be called earlier, but it’s God’s plan. This is where he’s meant to be.”

E.J. Liddell is the first Buckeye selected by the New Orleans Pelicans in the franchise’s near-20 year history.

E.J. Liddell said he watched the Pelicans play the Phoenix Suns during last season and believes he can fit into the organization alongside veterans, such as Brandon Ingram, CJ McCollum and younger players like 2019 No. 1 overall pick Zion Williamson.

“They have a great young core. They’ve been working hard,” Liddell said. “I just see they got a lot of dogs on their team, so I can see myself with them.”

He saw E.J. Liddell develop and grow into the work ethic he has today, saying he’s known his former high school teammate since fifth grade. Randolph said watching E.J. Liddell get drafted in front of their community “means the world.”

“Nobody knows how hard he actually works, like how much work he puts in behind closed doors,” Randolph said. “He deserves every bit of this.”

E.J. Liddell wasn’t the only Buckeye who made the jump to the professional ranks Thursday.

He and teammate freshman guard Malaki Branham became the first Buckeye duo selected in the NBA draft since the trio of center Greg Oden and guards Mike Conley and Daequan Cook were chosen in 2007, as Branham went No. 20 overall to the San Antonio Spurs

“That’s awesome. I stood up for Malaki because I know how hard he worked for it, so I’m really happy,” Liddell said. “He’s in a great situation in San Antonio.”

Pedon, who coached both E.J. Liddell and Branham throughout the entirety of their careers at Ohio State, said the pair represent the program and themselves well.

“One of the things that I take from it is these are two wonderful families and two high-level, high-character people. We know they can play, but these are Buckeye guys,” Pedon said. “They exemplify everything that Ohio State has stood for and stands for on and off the floor.”

With his college career behind him and NBA opportunity ahead, E.J. Liddell said he’s ready to put his head down and continue to do what he’s always done.

“Definitely a humbling experience. I felt like I worked my hardest to get better this past year,” Liddell said. “It’s not about where you start — it’s about where you finish and I’ve always started from the bottom, so it’s nothing new. Nothing new at all.”

From left, Daniel Kaluuya, Keke Palmer and Brandon Perea in “Nope.” Credit: Universal Pictures via TNS. Jordan Peele, former star of Comedy Central’s “Key and Peele” turned horror director of “Get Out” and “Us,” had high standards to live up to with his third feature film. Receiving his biggest budget to date of $68 million, Peele was obliged to attract audiences with nothing less than a shocking and original spectacle to exceed expectations.

Whether you are looking to rock out, appreciate some art or pig out at a festival, The Lantern has you covered. Here you will find a heavily researched — but still tragically incomplete — list of happenings around Columbus this week. Click the title of any event for more information.

Ohio State defensive line coach Larry Johnson speaks with the media at the Woody Hayes Athletic Center Tuesday. Credit: Casey Smith | Lantern TV Sports Producer. Entering his 27th year as a college coach, including his ninth at Ohio State, Larry Johnson is the one returner among the Buckeyes defensive staff.

Students for Justice in Palestine at Ohio State aim to bring attention to the Israeli-Palestinian conflict through a rally and candlelight vigil. Credit: Jessica Langer | Editor In Chief.

Ohio State announced on Wednesday they would lead a new engineering research center focusing on advanced manufacturing. Credit: Madison Kinner | Assistant Campus Editor. Ohio State will lead a new research center focusing on advanced manufacturing, which could be one of largest research investments in the last decade for the university, according to a Wednesday news release .

Crimes committed in the campus area and surrounding neighborhoods. Credit Madison Kinner | Assistant Campus Editor. As Ohio State reports fewer campus crimes than in past summers, the university will keep its current safety programs, surveillance and joint patrols with University Police and Columbus Division of Police officers for the fall semester.

There will be no changes from the university’s summer COVID-19 guidelines for the fall semester as of now, university spokesperson Chris Booker said in an email. Credit: Mackenzie Shanklin | Lantern File Photo.

Football: ‘Learning to slow it down’: Hayden adjusts to pace, complexity of college transition

Men’s Basketball: Royal building legacy while ‘still being at home’ as 2023 commit

Signing to share: Senior lecturer reflects on her role as ASL interpreter for DeWine’s COVID-19 briefings

Marla Berkowitz was hired as an American Sign Language interpreter for Ohio Gov. Mike DeWine’s coronavirus briefings. Berkowitz, a senior lecturer in the ASL program at Ohio State, is the only ASL Certified Deaf Interpreter (CDI) in the state of Ohio. Credit: Marla Berkowitz.