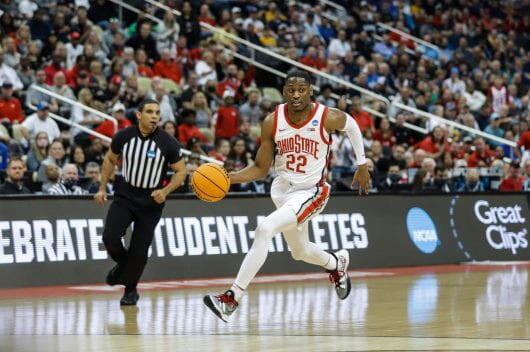 Freshman guard Malaki Branham was selected by the San Antonio Spurs with the No. 20 overall pick in the first round of the NBA Draft Thursday.

Branham becomes the Buckeyes’ first draft pick since forward Keita Bates-Diop went to the Minnesota Timberwolves in the second round in 2018.

The reigning Big Ten Freshman of the Year finished with an average of 13.7 points per game on a 49.8 season shooting percentage. He also made 41.6 percent of his 3-point attempts while swiping 23 steals — the second most among Buckeyes.

Branham landed on the Third Team All-Big Ten after collecting three conference Freshman of the Week honors during the season. In the first game of his career, Branham recorded an assist to then-sophomore forward Zed Key, who scored the game-winning dunk at the buzzer to defeat Akron Nov. 9, 2021.

Overcoming a stretch in which he averaged just over six points per game through his first 10 contests, Branham ramped up and recorded a clip of 16.9 points per outing after scoring 35 points at Nebraska Jan. 2. He tied Bates-Diop for the most points scored against a conference opponent among all Buckeyes since 2000 after defeating the Cornhuskers.