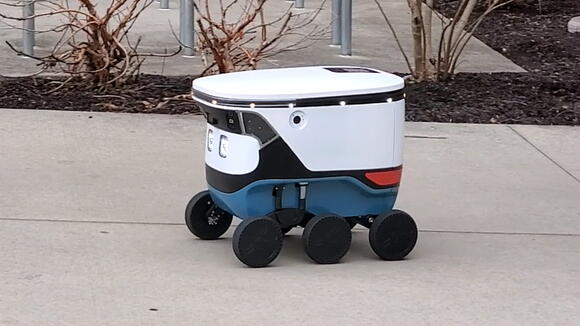 Food delivery robots will return to campus this fall through Grubhub’s partnership with technology company Cartken.  Credit: Courtesy of The Ohio State University

The robots will be able to deliver to residence halls and other select buildings across campus, Isaacs said. The goal is to increase to 80 robots by the end of fall semester, and some robots will begin mapping and learning the best routes across campus later this month, he said.

Eric Harper, senior director at Grubhub, said in the press release that the company looks forward to continue its work with Ohio State on the campus dining experience.

“We’ve worked with Ohio State University for years on the campus dining front, and they are always an early adopter of solutions that create efficiencies for their operations and improve the student experience,” Harper said.

The robots were tested on Ohio State’s campus in the spring , operating from Mirror Lake Eatery to Lincoln and Morrill Towers.

Christian Bersch, Cartken’s chief executive officer of Cartken, said in the press release the company is excited to develop their robot delivery services through their partnership with Grubhub.

“This collaboration perfectly aligns with our mission to use robotics and AI technology to provide friction-free and environmentally sustainable delivery, and have robots serve the community,”  Bersch said. “We are excited to scale alongside Grubhub and offer robot delivery to students on campuses across the country.”

The return comes after Ohio State announced March 3 that Grubhub would retire its food rovers produced by Yandex, a Russian-owned technology company, that it used in fall 2021 and start the of the 2022 spring semester as U.S. companies began to impose sanctions on Russian leaders and oligarchs following the invasion of Ukraine.

Zia Ahmed, senior director of Student Life Dining Services, said in the press release the university is excited to bring food robots back to campus.

“Robot delivery has been very popular on campus this past school year, validating our prediction that students would appreciate autonomous mobile delivery,” Ahmed said.