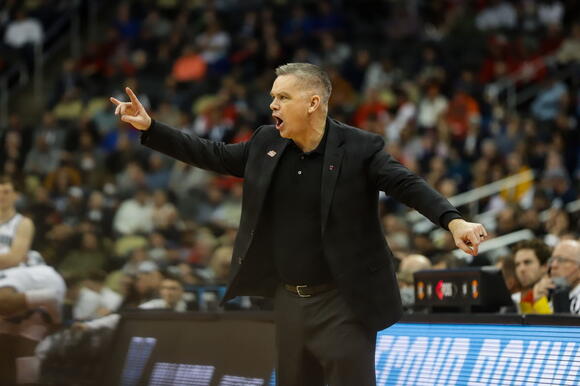 Head coach Chris Holtmann coaches from the sideline during the second half of No. 7 Ohio State’s Round of 32 matchup against No. 2 Villanova March 20 at PPG Paints Arena in Pittsburgh. Ohio State lost 71-61. Credit: Mackenzie Shanklin | Lantern File photo

There will be many introductory handshakes between Buckeyes in 2022.

More than half of the Ohio State men’s basketball roster will turn over next season, raising the need to plug holes left in the production on the floor. While guard Malaki Branham and forward E.J. Liddell await the NBA draft in June, other former players — such as forwards Justin Ahrens, who transferred to Loyola Marymount, and alumus Kyle Young— will no longer don Buckeye uniforms.

The Buckeyes’ incoming five-man recruiting class will add to their three additions through the transfer portal since the end of last season, giving head coach Chris Holtmann eight new players to fill voids. Holtmann said on The Buckeye Show on 97.1 The Fan Thursday the reduction this offseason “was a year unlike any we’ve had,” but he’s looking forward to the the incoming Buckeyes’ potential.

“The pressure is always on you in recruiting, but no more this year when we knew who we were losing,” Holtmann said. “There was a lot riding on this class, and our staff did a great job. They really did a phenomenal job, and now we’ve got to develop them.”

Ohio State landed four four-star recruits and a three-star guard to round out its 2022 recruiting class. According to the 2022 ESPN 100 , the Buckeyes have four top-60 recruits: forward Brice Sensabaugh at No. 42, guard Bruce Thornton at No. 48, forward Roddy Gayle Jr. at No. 56 and center Felix Okpara at No. 57.

According to 247Sports and Rivals , Ohio State has the No. 6-best high school recruiting class among all college basketball programs in 2022. Holtmann said having a range of players to contribute at different positions will “meet real needs” for the Buckeyes.

“It’s exciting to be able to work with guys that we believe have really, really bright futures in Buckeye uniforms,” Holtmann said. “I think, as always, the key will be player development and then keeping this group together for a couple of years.”

Sensabaugh stands 6-foot-6 and hails from Orlando, Florida. Despite not playing in 2020-21 due to knee surgery, Sensabaugh returned last season and earned Mr. Basketball in Florida in April.

According to MaxPreps , Sensabaugh averaged 24.6 points per game on 52 percent shooting last season. He also recorded 7.4 rebounds per game and averaged 0.7 blocks per contest, showing his ability to use length to his advantage.

Holtmann said Sensabaugh is “one of the most unique players” his staff has coached, reminding him of one former Buckeye forward: Duane Washington Jr.

“He’s Duane as a freshman in a 6-foot-6 frame, if you can remember that. Duane came in pretty confident,” Holtmann said. “He’s as good a shooter as there is in the country — and as a freshman.”

Gayle moved from Niagara Falls, New York, to Mt. Pleasant, Utah, and joined the men’s basketball team at Wasatch Academy midway through the 2020-21 season, according to a release . Okpara will figure to provide Ohio State size down low, as Holtmann said the 6-foot-11 center will play some next season but will “need some time to grow.”

Ohio State added a triumvirate of guards through the transfer portal to make up for losing four from the room this offseason. Incoming three-star Bowen Hardman will join Wright State’s Tanner Holden , Oklahoma State’s Isaac Likekele and West Virginia’s Sean McNeil as newcomers to the Buckeyes’ guard unit.

Ahrens and former guard Meechie Johnson Jr. are the only two to transfer out of Ohio State since the end of the season, and Holtmann said the program has been fortunate to not lose as many players to the portal compared to other programs. Holtmann said while he wants two-thirds of his roster to be recruited high school players, the portal adds an interesting wrinkle for college basketball.

“In this day and age, you certainly can’t ignore the importance of the transfer portal,” Holtmann said. “College basketball is not like college football where you’re going to get a good player and keep them for three years. I wish it was like that in a lot of ways but it’s not like that nor will it ever be.”

Holtmann received a three-year contract extension May 18 , keeping him at the helm of the Buckeyes through the 2027-28 season.

Ohio State hasn’t advanced past the second round of the NCAA Tournament since 2014-15, and Holtmann knows the hurdle the Buckeyes must overcome. After going 20-12 last season, Holtmann said he must focus on developing the next group of Buckeyes to chase what they’ve set to accomplish.

“No one’s hungrier than I think we are, as a staff or as a program, obviously to continue to move this thing forward,” Holtmann said. “That’s what we’re working really hard for every day.”